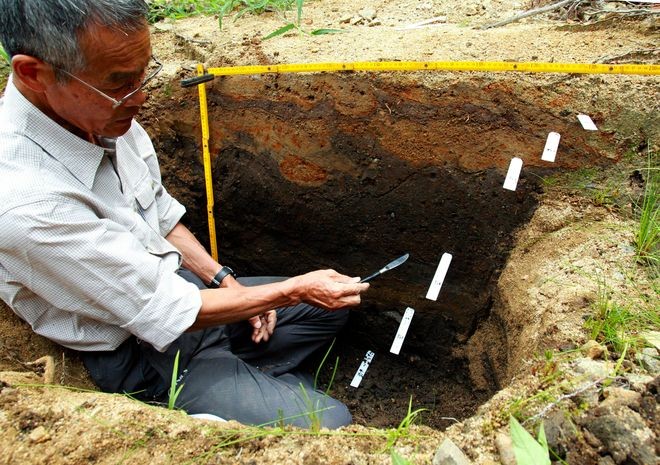 A shocking study that a massive earthquake could trigger tsunami nearly 30 meters high across Pacific coastal regions from Hokkaido in the far north to Chiba Prefecture in eastern Japan are based on deposits in geological formations caused by such catastrophic events in the distant past.

The projection recently released by a government panel of experts was based on seismic sources along the Japan Trench to the north of the source area of the 2011 Great East Japan Earthquake and along the Chishima (Kuril) Trench, which extends further to the north of it.

The panel said April 21 that the former event could trigger tsunami of up to 29.7 meters in Miyako, Iwate Prefecture, and the latter one of up to 27.9 meters in Erimo, Hokkaido.

Depending on the location of the seismic source, some areas were projected at some point in the future to face the prospect of tsunami twice the height of the waves generated by the Great East Japan Earthquake that claimed nearly 20,000 lives.

“Our estimates are highly probable, because they are based on largest-class tsunami events that occurred in the past,” said Kenji Satake, a seismologist and director of the University of Tokyo’s Earthquake Research Institute, who chairs the expert panel. “We hope they will be used in working out measures against tsunami, with an emphasis on evacuating residents.”

The latest projections were derived from studies of deposits that were washed ashore in different areas by tsunami events.

After a tsunami strikes inland and recedes, it leaves behind a geological formation of mud, sand and other substances known as tsunami deposits that originally lay on the seafloor.

Studies of the deposits and of the geological formations above and below them can tell, for example, roughly when the tsunami struck and how far inland the flooding spread.

A wealth of historical records exist for earthquakes along the Nankai Trough, a seabed depression to the south of Japan. By contrast, seismic and tsunami events that hit Hokkaido and the Tohoku region to the north are poorly documented in old writings and other materials.

In the latter areas, vast plains have survived intact without being dug up for farming and other purposes, which allowed for tsunami deposit studies. Geological formations in those regions also contain volcanic ash from past volcanic eruptions, making it easy to determine when they occurred.

Studies on tsunami deposits started relatively early in Hokkaido and Miyagi Prefecture. Similar research was undertaken in various other areas after the importance of the science attracted fresh attention following the Great East Japan Earthquake.

“Traces of tsunami are lost in areas long inhabited by humans, where the ground has been dug up over and over again,” said Kazuomi Hirakawa, a Hokkaido University professor emeritus of physical geography, who sits on the panel of experts. “Probably in no other part of the world have tsunami deposits been studied so comprehensively over such a broad geographical extent.”

Research has found that a seismic event in the 17th century generated a tsunami as far as 6 kilometers inland in and around the Tokachi area of Hokkaido. Studies have also shown that coastal areas of Noda, Iwate Prefecture, have been inundated by tsunami 18 to 20 times during the past 7,000 years.

The experts on the government panel studied available data on tsunami deposits from the past six millennia found in Hokkaido and the Tohoku region. They then calculated--with extreme cases excluded--the magnitudes and sources of earthquakes that would have left matching amounts of tsunami deposits in the respective areas. This allowed them to reconstruct the heights of largest-class tsunami events in the past.

“Close studies of tsunami deposits allow us to learn about tsunami behavior,” said Hirakawa. “Tsunami estimates were available earlier that were based on localized data on deposits, but ours are the first set of projections that used similar data on such a broad geographical scale, so they are groundbreaking. I hope they will be used in working out disaster management plans.”

Still, the challenge remains on how to deal with earthquakes that occur along the Japan Trench to the south of the source area of the Great East Japan Earthquake.

The experts were unable to carry out trial calculations of such seismic events due to the advanced state of development in the southern Tohoku region and the Kanto region, close to the assumed seismic source area. This means few sites are available for studying tsunami deposits there.

The expert panel said the topic remains a task to be undertaken in the future.