Asahi survey: 72% say no rush for Diet to revise Constitution 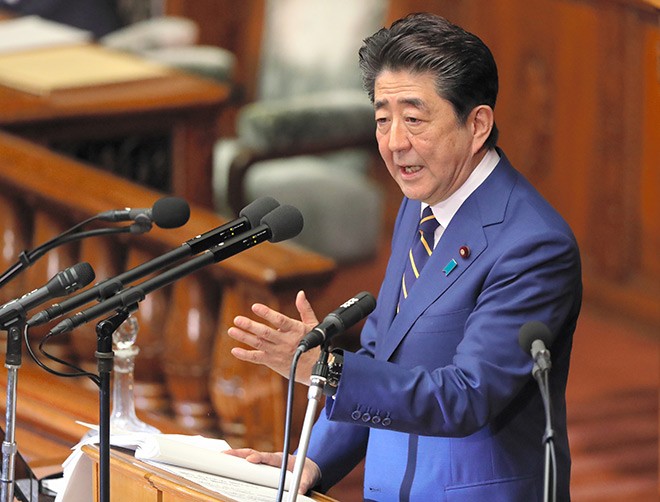 A large majority of voters do not share Prime Minister Shinzo Abe's zeal or urgency with revising the nation's Constitution, according to an Asahi Shimbun poll.

The survey on the Constitution showed that while 72 percent believe that lawmakers do not need to accelerate debate on constitutional amendment, only 22 percent cited the need to do so.

The annual survey was conducted ahead of May 3, Constitution Day, a national holiday. The postwar Constitution, which went into force in 1947, has never been amended.

The poll also showed the revision is not an urgent priority among respondents who support Abe’s ruling Liberal Democratic Party, with 64 percent saying there is no need and 32 percent citing a need.

Among unaffiliated voters, 75 percent said Diet members do not need to rush the debate over constitutional amendment while 18 percent supported accelerating the discussion.

In the poll, respondents were asked to choose one of four responses with respect to how large a momentum has built for constitutional revision.

Two percent said “greatly” and 19 percent “somewhat,” showing a combined 21 percent believe that momentum has grown for revision, down from 22 percent in last year’s survey.

In contrast, the combined figure for those who responded that momentum has not developed noticeably stood at 76 percent, up from 72 percent in the previous poll.

In the latest survey, 58 percent replied that the momentum has grown “not much,” while 18 percent said “not at all.”

The survey also asked respondents to choose one of three responses concerning an LDP revision proposal for a new article for emergency Cabinet orders, including a measure to temporarily restrict people’s rights, to deal with natural disasters.

Fifty-seven percent chose the response that the government should handle such emergencies without amending the Constitution, up from 55 percent in the previous poll.

Thirty-one percent cited the constitutional revision to allow for emergency Cabinet orders, compared with 28 percent in the last survey.

Eight percent said such an article is not necessary, down from 10 percent in the 2019 survey.

The percentage of respondents who opposed amending the war-renouncing Article 9 was similar to last year’s poll.

Twenty-seven percent said it should be revised, down from 28 percent.

Abe has proposed that pacifist Article 9 be amended to clearly state the existence of the Self-Defense Forces. He argues that this would end debate over the constitutionality of the SDF and allow SDF members to perform their duties with pride.

Questionnaires were mailed to 3,000 voters nationwide from early March to mid-April. Valid responses were received from 2,053, 68 percent of the total.