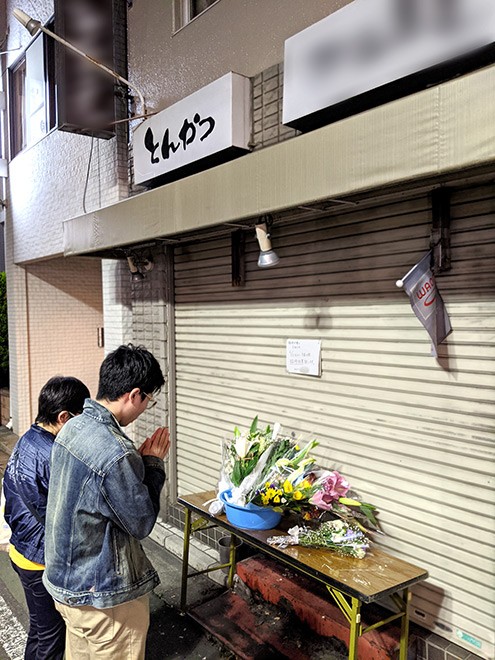 People offer prayers on May 2 for a man who died in a fire in Tokyo’s Nerima Ward. He operated a pork cutlet restaurant, which has been forced to shut down due to the new coronavirus pandemic. (Shingo Tsuru)

A popular 54-year-old Tokyo man had a lot to live for operating his pork cutlet restaurant and being chosen as a local torch runner for the 2020 Summer Olympics.

But the new coronavirus pandemic forced the man to close his business and also delayed his participation in carrying the torch as the Olympics were postponed for a year.

The man appeared to be despondent in recent days by the turn of events, according to people who knew him.

He was found inside in a three-story building in Nerima Ward after a fire broke out around 10 p.m. on April 30, according to Tokyo’s Metropolitan Police Department.

Sources connected to the police investigation said there were signs suggesting that he doused himself with oil.

Although only a portion of his restaurant on the first floor of the building was destroyed, the man died from burns suffered over his entire body after he was taken by ambulance to a hospital.

According to his neighbors, he operated the restaurant after inheriting it from his wife’s parents.

He was eager to revitalize local shopping streets and proposed various ideas for realizing the goal.

When he was chosen as a local Olympic torchbearer, he was elated, saying, “This is incredible.”

But the outbreak of the new coronavirus in Japan early this year changed his life completely.

The Tokyo Olympics and Paralympics were postponed for a year. And he was forced to close his restaurant on April 13, after a state of emergency was declared on April 7 to slow the spread of the virus.

On April 27, the restaurant owner visited Hiroshi Ono, the chief of the local association of shop operators, to obtain disinfectants to prepare for the early reopening of his restaurant.

But when he learned that the association expected to receive disinfectants after the Golden Week holidays are over on May 6, he looked considerably disappointed.

He also said he found it impossible to operate his restaurant unless the pandemic is brought under control.

When Ono visited his restaurant to bring him disinfectants late on the afternoon of April 30, the man said he had decided to close his business forever.

“He was a hard worker and cheerful and thought about the well-being of the entire community,” Ono said. “Everybody liked him.”