GOHAN LAB/ Vinegared octopus and cucumber: A balanced combination that is light on the sweetness 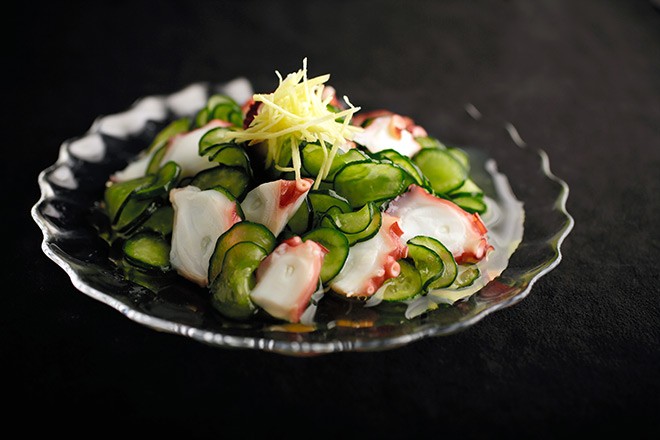 Over the next four weeks, our focus will be on vinegar, a familiar seasoning that not only adds sourness to dishes but also gives them complex aroma and flavors.

It can also enhance the preservative quality of food, such as fresh fish soaked in vinegar and pickled vegetables. Around the world, a variety of vinegars have been produced from local crops and generated an array of dishes.

First in line is the Japanese “sunomono,” vegetables or seafood seasoned with a mixture of vinegar and other flavorings.

Despite being somewhat sidelined by the salad, the sweet-sour taste of the low-key vinegared dishes are universally popular. In Asia, it serves as a switch to turn on one’s appetite in the hot and humid climate.

This week’s recipe introduces a balanced combination that is light on the sweetness and goes well with seafood and vegetables. The classic pair of octopus and cucumber have been chosen as the ingredients. By sprinkling salt on the cucumber, you get a nice texture and a refreshing look that turn the ingredients into a fine dish.

If the salt and soy sauce in the sanbaizu are replaced by fish sauce, you get what we have named “Vietnamese-style vinegar.” When poured on the same octopus and cucumber, it gives them a new look. Add garlic and chili to taste.

The cookery science of making full use of vinegar is supervised by Sho Ishii, who works at a section focusing on flavors at Mizkan, a manufacturer of vinegar and other foods, as well as Takuya Yorozu from the company’s menu communication section.

More and more each year, people are turning to simpler cooking procedures. According to Mizkan, seasoned vinegar with added salt or sweetness now makes up 60 percent of the domestic sales of cooking vinegar, while pure vinegar constitutes 40 percent.

1. Slice cucumber in thin rounds that are about 2 mm thick. Place in bowl, thoroughly mix in 1/4 tsp salt (PHOTO A) and leave for about 5 minutes. If a slice bends when picked up, wrap slices in paper towel and lightly squeeze out water by pressing between both hands.

2. Peel ginger, finely slice along fiber and cut into strips. Immerse briefly in water and drain.

3. Pat surface of boiled octopus dry and cut into slices that are 5 to 6 mm thick (PHOTO B).

5. Mix cucumber and octopus and serve and sprinkle ginger on top. Pour preferred amount of seasoned vinegar right before eating.

Sho Ishii works at a section that focuses on tastes at Mizkan.

Mix ingredients for the Vietnamese-style vinegar that are 1 Tbsp vinegar, 1 Tbsp sugar, 1 Tbsp either of fish sauce, nuoc mam or nam pla, 2 Tbsp water, bit of grated garlic and chili to taste.

Slice 50 grams of store-bought barbecued pork (“yakibuta”) into 6- to 7-mm thick strips. Peel 100 grams daikon radish and 50 grams carrot and cut into fine strips. A slicer will become handy. Cut 3 to 4 stalks of coriander into 3- to 4-cm pieces.

Mix cut vegetables and serve on plate, pour Vietnamese-style vinegar and scatter pork on top. Other than barbecued pork, steamed chicken or fish paste products may be added.

Vinegar is a fermented product created by acetic acid bacteria, and the main component of its sourness is the acetic acid.

Varieties such as cereal vinegar, rice vinegar and fruit vinegar are produced depending on the raw materials and the fermentation method.