Criteria listed for lifting state of emergency over COVID-19 crisis 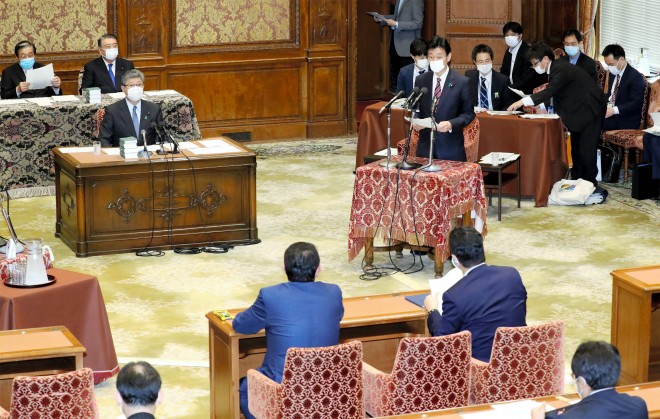 Yasutoshi Nishimura, minister in charge of the coronavirus pandemic, reports on the government’s plan to extend the state of emergency at the Lower House Committee on Rules and Administration on May 4. (Takeshi Iwashita)

Yasutoshi Nishimura, the minister in charge of Japan’s response to the novel coronavirus pandemic, on May 4 listed the criteria for lifting the state of emergency, which will be extended through May 31.

Prime Minister Shinzo Abe announced at a news conference later on May 4 that the nationwide state of emergency will continue beyond the initial deadline of May 6 through the end of the month.

“To avoid imposing an additional burden on the health care system, we should make further efforts to slow the spread of the virus and reduce new cases,” Nishimura, who is also state minister in charge of economic revitalization, said at a session of the Lower House Committee on Rules and Administration.

But he also said the state of emergency may be lifted for some prefectures where the outbreak is believed to be under control.

Nishimura said an expert panel will assess the situation based on certain factors.

They are: the number of new cases over the most recent two to three weeks; the ratio of infections where the route of transmission is unknown; whether diagnostic testing is being conducted adequately; whether hospitals have the capacity to deal with new COVID-19 patients; and whether the virus has spread to nearby prefectures.

Currently, 13 prefectures are listed as requiring special measures due to the proliferation of coronavirus infections in their jurisdictions.

Nishimura said that based on the criteria, other prefectures could be moved to this category.

But he added that those not listed in the same category of the 13 prefectures could resume normal social and business activities in stages.

The state of emergency was first declared on April 7 for Tokyo and six prefectures with large urban centers. It was expanded to all of Japan on April 16.