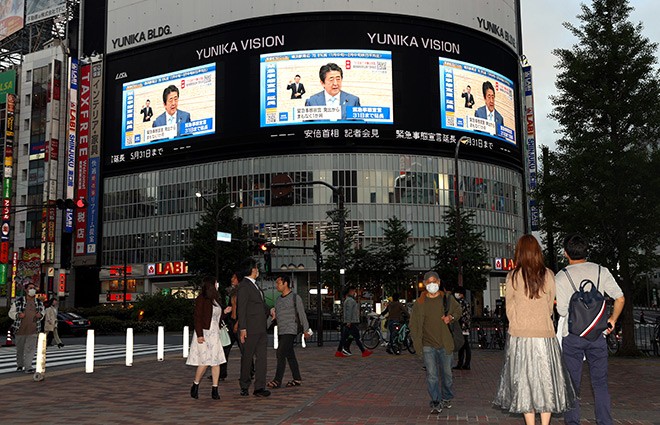 Pedestrians in Tokyo's Shinjuku district watch Prime Minister Shinzo Abe's May 4 news conference at which he announced an extension of the state of emergency regarding the coronavirus outbreak. (Nobuo Fujiwara)

Prime Minister Shinzo Abe’s mixed message in extending the nationwide state of emergency reflects his attempt to heed the advice of health experts while addressing the pleas of businesses hit hard in the pandemic.

Abe announced on May 4 that the state of emergency would continue for the entire nation until the end of May to control the spread of COVID-19. Although the extension beyond the initial May 6 deadline would entail a prolonged reduction of business hours or outright closure of operations, the prime minister indicated that some leeway could be given.

“If we continue the current situation of severely restricting economic and social activities, our very lifestyles could be placed in danger,” Abe said at his May 4 news conference.

He also left open the possibility that some facilities, such as art museums and libraries, could be allowed to resume operations if they take appropriate measures to prevent further coronavirus infections, such as social distancing.

Government sources said that Abe had decided in late April that an extension of the state of emergency for the entire nation was unavoidable. The National Governors’ Association and the Japan Medical Association had called for such an extension.

Although the extension is intended to prevent a surge in new COVID-19 infections, concerns were growing that another month of limited economic activity could increase bankruptcies among small businesses and fuel dissatisfaction within society at having to continue avoiding various activities.

“We would have been criticized if we had extended the state of emergency or if we had lifted it,” a high-ranking government official said about the latest decision. “So our plan was to extend it for the entire nation while also including various steps that could be taken as an exit strategy for some prefectures.”

Abe explained that his decision to extend the state of emergency was heart-wrenching, and he expressed his sympathies for small business operators who were suffering as a result of curtailing or shutting down their operations.

He tried to offer hope to those owners, saying that some could begin receiving government payments of as much as 2 million yen ($18,800) to sustain their businesses as early as May 8. The payments are intended for small businesses that have seen major sales decreases because of the coronavirus pandemic.