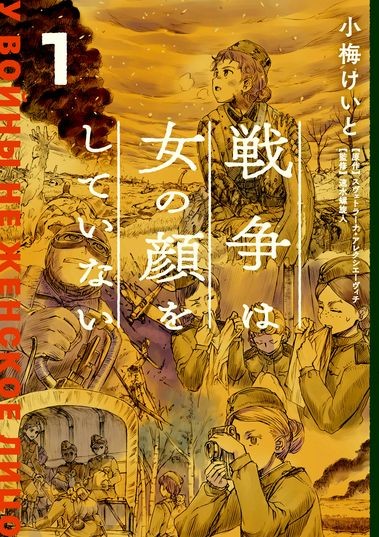 Japan has produced a wide range of manga and anime about the horrors of World War II, but the recent undertaking for war-related publication has been described as “beyond imagination.”

The manga is not set in Japan, but in the former Soviet Union. It was adapted from “The Unwomanly Face of War,” a book by 2015 Nobel Literature Prize-winning author Svetlana Alexievich.

Alexievich’s book recounts the experiences of hundreds of Soviet women who volunteered in World War II after a staggering number of male combatants were killed.

The Japanese translation of the 482-page book in paperback form has been available from Iwanami Shoten Publishers and is currently in its 10th print.

Turning the book into a manga stunned many in the industry.

“It was beyond my imagination that somebody would ever take up such a challenge,” Yoshiyuki Tomino, director of the Mobile Suit Gundam anime series, said.

The manga, released by Kadokawa Corp. in book form in January, has sold more than 100,000 copies. The illustrations were drawn by Keito Koume, the creator of the “Spice and Wolf” series.

Alexievich’s “The Unwomanly Face of War,” her first book, was published in the Soviet Union in 1985.

It chronicles the everyday lives, emotions and thoughts of more than 500 women who served in the war as snipers, pilots, tank drivers, anti-aircraft artillery operators, surgeons, nurses and others on the front lines, as well as those who backed the war effort as cooks, laundresses and telephone operators.

Around 1 million Soviet women signed up to go to war, most of them in their teens and 20s.

Alexievich, a Belarussian journalist, began interviewing the female veterans in 1978. After completing her manuscript, she had to wait for two years before it was finally published.

Many publishers had shunned the work for shedding light on the “filth” of the Soviet war against Nazi Germany and for straying from the official Soviet narrative of the conflict.

The war had been typically told from a male point of view, with heroism at the center. But in Alexievich’s book, the feelings, smells and colors on the battlefields are given from a female perspective.

“The Unwomanly Face of War” has sold more than 2 million copies.

The project to turn the book into a manga was the brainchild of Kentaro Ogino, a freelance manga editor.

Ogino said Japan already has such classics as “Grave of the Fireflies,” a 1988 anime film adapted from a short novel about the starvation deaths of a boy and her younger sister following a firebombing raid in Kobe, and “Barefoot Gen,” a manga series released in the 1970s and 1980s about a man’s horrific experiences in the atomic bombing on Hiroshima.

“Both are celebrated, but I believed we should strive to add some more that will be lauded,” Ogino said.

He also said he was greatly inspired by the unexpected success of “In This Corner of the World,” a 2016 anime film directed by Sunao Katabuchi.

The film, based on a manga by Fumiyo Kono, describes the daily life of a young woman who struggles to survive with her family as U.S. air raids intensify in Hiroshima Prefecture.

The film opened in Japan at a limited number of theaters. But over 1,000 days, it had attracted more than 2 million moviegoers. It was later released in dozens of countries.

Ogino said that seeing so many people embrace a war-related film centered on a woman made him think that they would also be interested in “The Unwomanly Face of War.”

He said Alexievich’s book amounts to 500 tales of “In This Corner of the World” told from the perspectives of Soviet women.

Wanting to direct the manga project at young audiences, Ogino asked Koume, whose characters are big-eyed and cute, to create the artwork.

“Many war-themed manga come in a realistic form, but I am afraid that today’s teenagers will not relate to such a drawing style,” Ogino said.

He also noted that some readers might consider big-eyed, cute-looking characters to be “inappropriate” for a work intended to depict the brutality of war.

However, he said the manga version is intended to push readers toward the original book.

Although the characters are presented in a way to appeal to young audiences, the production team recreated objects in the manga as faithfully as possible to those used in the Soviet era, including, for example, the shape of cups.

Rasenjin Hayami, an experienced manga artist and illustrator who is well versed in the Soviet and Russian military, supervised the work.

If pictures were available of the Soviet veterans, Koume drew their characters to resemble the real women.

The manga opens with a unit who wash the heavy uniforms of soldiers. The team chose that specific episode because readers may relate to it as an extension of daily living.

The manga debuted on the ComicWalker website in April 2019. It soon created a buzz, particularly among those who had read Alexievich’s book, which was translated into Japanese by Midori Miura.

According to Ryusuke Nagura, an editor with Iwanami Shoten who handled the translated book, the manga version came as a blessing for the original.

After the manga was released in book form, Iwanami Shoten reprinted 10,000 copies of the original, bringing the total to 40,000.

The new copies come with a book band bearing a scene from the manga, a collaboration between the two publishing houses.

Nagura said that creating a manga based on “The Unwomanly Face of War” did not surprise him because he believed Alexievich’s book, with its detailed accounts of everyday life, is a good match for a comic version.

“Chronicling the larger course of history is not enough to pass on the anti-war sentiment,” he said. “Describing the emotional ups and downs that people went through and the details of their daily lives also have to be there.”

Many episodes in Alexievich’s book are not yet covered in the manga version. Kodansha plans to release a sequel.

“Many producers have assumed that manga must be easy to understand to have a broader appeal,” manga editor Ogino said. “But there are readers out there who will flock to a work that explores serious topics if it is presented with a good lead.”