Teen who lost all video games on 3/11, buddy, win award for app 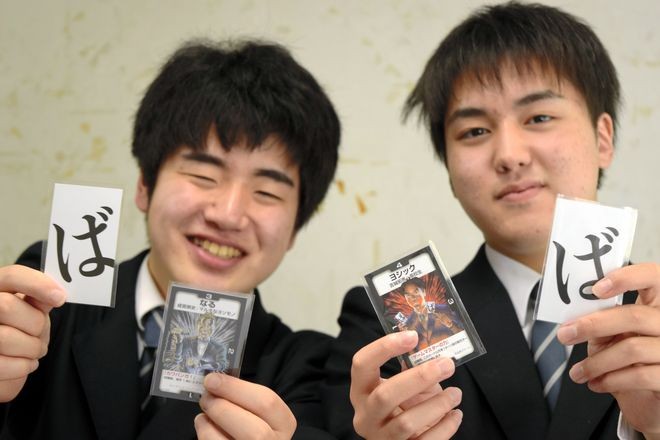 KESENNUMA, Miyagi Prefecture--Eigo Hatakeyama's prized video games were washed away when the tsunami spawned by the 2011 Great East Japan Earthquake devastated this city and damaged his family’s house.

But the loss the disaster inflicted when Hatakeyama, now 18, was an elementary school second-grader soon drove him to start creating software in his spare time.

His devotion to game development paid off in March this year when a role-playing video game app for smartphones by the third-year Kesennuma High School student and classmate Takuma Yoshiki, 17, took top prize at a national competition for high school students.

Players of the pair's “Kesennuma Quest” can virtually walk about Kesennuma to shop and speak with real-life residents and people at actual stores in the reproduced city. Players' avatars interact dressed in costumes of the city’s ascidian-based tourism promotion character.

“I thought if I made a game where people who left Kesennuma could see the faces of locals they knew, it would motivate them to return to their hometown,” Hatakeyama said.

Awareness that his hometown was in serious decline first hit Hatakeyama in high school, where he began to think about ways to attract people to the city to stop its population from shrinking.

He concluded that instead of holding temporary events, the best way to revive Kesennuma would be through creating something permanent that would stick in people’s minds.

Though Hatakeyama developed the original “Kesennuma Quest” in the summer of 2018, he found it hard to fine-tune the app alone and turned to Yoshiki, his regular video game partner, to try out the software to figure out how to improve it.

Yoshiki, like Hatakeyama, has been an avid gamer since he was a child. Though Yoshiki could not play video games for a while in the aftermath of the 2011 earthquake, he was later completely absorbed in them, which helped the two become friends.

One quibble Yoshiki had with “Kesennuma Quest” was the characters moving too slowly.

Following multiple tweaks, Hatakeyama and Yoshiki unveiled their invention at the My Project Award contest, in which high school students offer competing ideas on how to settle problems facing local communities as part of inquiry-based learning.

The My Project Award contest is organized by a steering committee comprising entities including Tokyo-based nonprofit educational organization Katariba.

A total of 1,903 schools, and 751 individuals and groups presented proposals in the latest competition, which was first held in 2013 in Otsuchi, Iwate Prefecture.

After winning the preliminary rounds, 48 teams competed in the final round in March by video conference due to the new coronavirus pandemic.

“Kesennuma Quest” scooped both the education minister’s prize and the special award given to an entrant highly evaluated by participating high school students, and was praised by the contest judges as “a symbol of the new way of learning.”

“I hope people around Japan will become fans of Kesennuma through playing our game,” Hatakeyama said.

“I just want local residents to enjoy the game first of all to bring smiles to their faces,” he said.

Hatakeyama and Yoshiki also said they have created a playing card game version of “Kesennuma Quest,” which features the area’s local dialect, that can be played at events in Kesennuma and on other occasions.