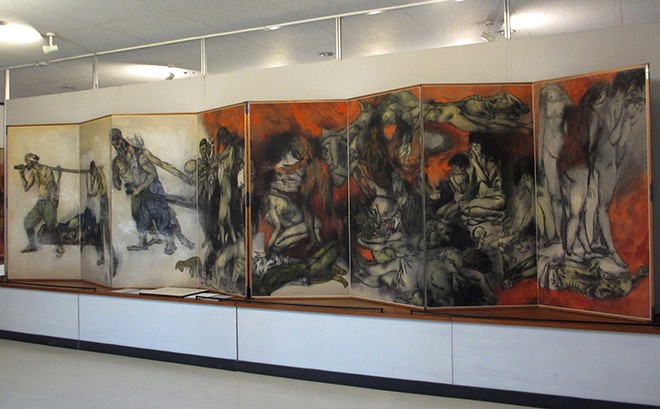 HIGASHI-MATSUYAMA, Saitama Prefecture--A museum here famous for artworks about the atomic bombing of Hiroshima is urgently seeking donations to survive through the novel coronavirus pandemic.

Being a private cultural institution, the Maruki Gallery for the Hiroshima Panels does not receive much financial assistance from the government or companies.

“I want to preserve the museum with ‘The Hiroshima Panels’ for the next generation,” said curator Yukinori Okamura.

Iri Maruki (1901-1995) and his wife, Toshi (1912-2000), created “The Hiroshima Panels” to portray the horrors of nuclear weaponry. The couple established the museum in 1967 to make the artistic productions accessible to the public.

Fourteen of the 15 paintings from the series belong to the gallery. The other one is kept at the Nagasaki Atomic Bomb Museum.

The Maruki Gallery is also known for its collection of works by Suma, mother of Iri, who started painting in her own style after turning 70.

But the museum closed its doors on April 9 during the spread of the virus, ending the revenue stream from visitors. Schools and other organizations have canceled their group tours to the gallery, and rentals of the artworks and traveling exhibitions have been scrapped or postponed.

The museum had already been soliciting donations since 2017 to renovate the aged facility. Its new donation campaign that started on April 30 is intended for its very survival.

“A situation lingers where we have to contemplate human lives due to natural disasters and the infectious disease, and the works by Iri and Toshi represent their insights into those lives,” Okamura said. “I would like people to view their creations after the pandemic ends.”

Donations can be made at: (https://congrant.com/project/marukigallery/1587).