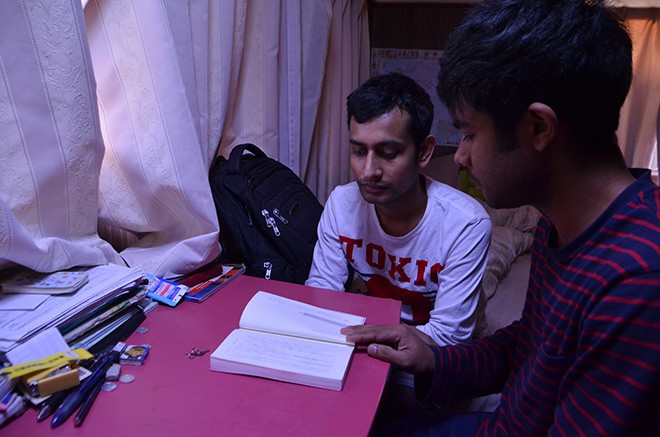 Rakibul, right, and Jane, both students from Bangladesh, read a Japanese book in Osaka Prefecture on April 23. (Yoshiyuki Ito)

In the dim light of a kitchen in a shared house in Osaka Prefecture, three university students gazed silently at several blue envelopes left unopened on a dining table.

“All the letters say the same thing,” said Rakibul, a 22-year-old from Bangladesh.

They were notices of overdue tuition payments, and the letters urged each student to pay the fees for the first semester by the end of April.

“I’ve lost my part-time job thanks to the virus,” Rahinul, 25, another student from Bangladesh, said just days before the payment was due. “If this goes on, I can never ever pay the tuition.”

The COVID-19 pandemic has emptied the pocketbooks of foreign students in Japan, most of whom have relied on part-time jobs, such as working at convenience stores and restaurants, to make ends meet.

Under the national state of emergency, many such businesses have shut down after losing customers and revenues. Part-time staffers like Rakibul and Rahinul were the first ones let go.

“I’ve been in trouble with so many things because of the coronavirus,” Rakibul said.

He came to Japan three years ago, inspired by the strength of the country’s manufacturing industry, such as the automobile sector.

With dreams of landing a high-paying job at a Japanese company in Bangladesh, Rakibul entered a private university in Osaka Prefecture.

He has lived in a house in the southern part of the prefecture with seven other students from Bangladesh, including Rahinul.

Life in Japan has never been easy for them.

Last year, Rahinul worked at a convenience store and received money from his mother who runs an aquafarming business in Bangladesh to pay the annual tuition of close to 1 million yen ($9,420).

But things got much tougher after he spent time in Bangladesh for a winter vacation and returned to Japan in early March.

By then, the pandemic was in full swing.

The convenience store where he had worked lost too many customers, and Rahinul was told to take time off from work indefinitely.

Then, the Bangladeshi city of Dacca, where his mother lives, was locked down. Her income dropped so sharply that she could no longer make a remittance to her son.

His housemates have also lost their part-time jobs, and their parents are struggling in the pandemic.

The eight students had yet to pay their tuition fees by late April.

When they could not cover the rent for April, the landlord charged them only half the amount but cut off the wireless LAN service that was included in the rent.

To continue taking university classes offered online, the students ended up paying for a new wireless service out of their pockets.

Foreign students who have registered at municipal offices are eligible for the 100,000-yen cash relief handouts from the government.

But after subtracting food and other daily expenses, they still will not have enough left to cover the tuition.

“I love eating fruits, potato chips or cookies after a meal. But I can’t even afford to do that anymore,” he said.

For many foreign students, losing their part-time jobs deprives them not only of income but also valuable opportunities to learn “real” Japanese and practice everyday conversation.

Huang Hongwei, 21, came to Japan from China’s Fujian province as an exchange student in October 2019.

He has studied Japanese at a private university in Osaka Prefecture while working at a conveyer-belt sushi restaurant. His dream is to become a simultaneous interpreter.

“The Japanese conversation I have with restaurant staff and customers is totally different from the one that I learn in Japanese classes,” Huang said.

“A customer once told me, ‘Your Japanese is much better than mine.’ That made me so happy. I became confident,” he recalled.

As the COVID-19 disease spread further in March, his parents in China became worried and persuaded Huang to quit the part-time job.

Huang lost about 100,000 yen per month from the restaurant work, but he knew he could rely on remittances from his parents.

Most of all, he misses the valuable opportunity to learn the language, Huang said.

Under the state of emergency, Huang has mostly stayed inside a dormitory for foreign students and taken Japanese classes online.

“I have only one year to study here. This is just like studying Japanese in China,” he said.

“Employers are required to compensate part-time workers for loss of earnings, and foreign nationals should ask for it,” Iwahashi said.

There are other means of support available to the students.

Prefectural international exchange associations are providing consultation services for foreign students who have struggled academically and economically during the pandemic.