Okinawans fret over chemical foam leaked from U.S. Marine base 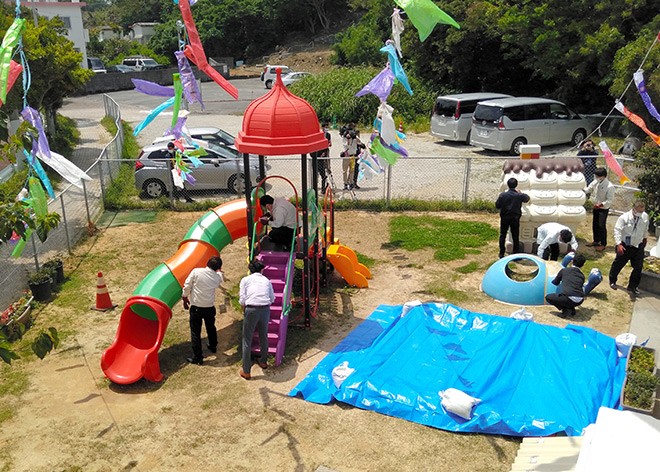 GINOWAN, Okinawa Prefecture--When children shouted about “flying cotton” at her day care center, Mineko Yonaha, the head of the facility, immediately warned them.

“Don’t touch it because you never know what it contains,” Yonaha told the children on April 10.

Several hours later, she learned it was firefighting foam leaked from the nearby U.S. Marine Corps Air Station Futenma, which is 40 meters away, and that it contains perfluorooctanesulfonic acid, or PFOS, a toxin that could cause cancer.

“We have been vigilant about the possible leak of potentially hazardous substances, but were stunned as it became a reality,” said Yonaha, who heads the No. 2 Satsuki day care center.

In all, about 143,000 liters of firefighting foam, or the equivalent of 715 200-liter drums, leaked in the surrounding area of the base, raising safety concerns among local residents.

Employees of the Defense Ministry’s Okinawa Defense Bureau cleaned the day care center building and its playground where the foam landed, and replaced sand in a sandbox.

About 227,000 liters of firefighting foam leaked in total, including the amount spilled outside the base, according to the U.S. military.

The leak occurred at a hangar in the base and the U.S. military is looking into the cause of the spill, it added.

The world shifted to restricting the manufacture and use of PFOS, in principle, about two decades ago, after experts warned of its potential harm to people’s health and the ecosystem.

But even today, many things remain unknown about PFOS, including the long-term consequences of the chemical accumulating in the human body.

Despite the potential danger, firefighters in Ginowan were forced to deal with the spill with little preparedness.

After receiving a report from a resident, they reached the area where the foam was discovered around 8 a.m. on April 11 and found a large amount flowing in a stream and flying over a nearby road.

Due to an absence of guidelines for responding to such a leak, the firefighters tried to remove the foam by using suction pumps they usually use to drain water from flooded houses.

When that method proved ineffective, they scooped up the foam using buckets after putting on gloves and long boots for protection.

After more than six hours of work, firefighters were able to scoop up only about 250-300 liters, including water, from the stream.

U.S. military personnel arrived at the scene sometime past noon that day, but they did not remain there.

According to the Ginowan city government, they did not join firefighters in the cleanup and left, saying they prioritized a cleanup inside the Futenma facility.

There is no official rule between Tokyo and Washington dictating the handling of potentially hazardous material that leaks outside of U.S. bases in Japan.

But the U.S. military’s response to the spill was a major departure from its approach to aircraft crashes outside bases.

When aircraft accidents occur, U.S. military personnel scramble to reach the scene ahead of Japanese authorities and cordon off the site to keep police and firefighters at bay.

They do not allow police officers to conduct on-the-spot investigations or take samples of soil below or around the damaged aircraft, something locals have witnessed over the years.

But with this spill, the U.S. military was slow to act, appalling local officials.

The focus of attention in the coming weeks over the firefighting foam leak will be the investigation into its cause and the scale of contamination.

But the extent to which Japanese officials will be able to uncover information will be up to the U.S. military’s discretion. Japanese officials need to gain its approval when they conduct investigations inside U.S. bases, according to the Status of Forces Agreement between Japan and the United States, which governs the treatment of U.S. defense personnel stationed in Japan, and other rules between the two allies.

The U.S. military moved unprecedentedly quickly to allow Japanese officials access to inside the base, observers said.

It allowed them to take water samples there, but not soil samples around the hanger where the firefighting foam had leaked.

PFOS is known to be resistant to decomposition in nature, raising the possibility that it could contaminate groundwater for years.

Koji Harada, an associate professor of environmental hygienics at Kyoto University, called for an inquiry into the leak to uncover more details that could help gauge the long-term consequences.

“There would be no harm to humans unless they take in a large amount of it at once, but the consensus among researchers in the world is that its effect is unknown when it is accumulated in the body over a long period,” he said. “It will be necessary to scrutinize exactly where the firefighting foam was used, and how it was leaked and spread, to predict the possible effect.

“The investigation into the source of contamination at the base, including the soil, will be imperative as PFOS could remain in the ground for more than 10 years and pollute the groundwater.”