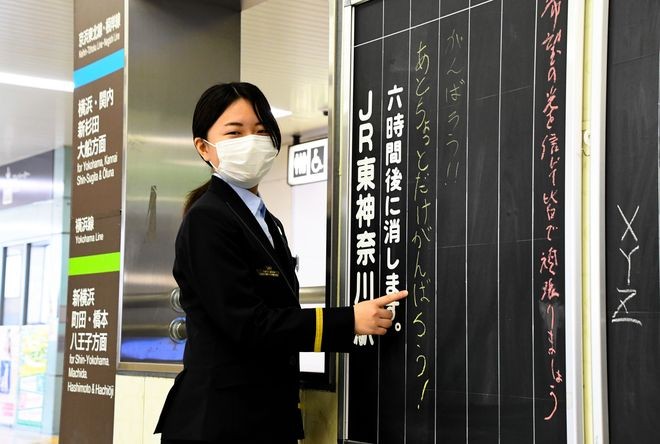 Misaki Honma shows off a traditional station message panel, which she proposed, at JR Higashi-Kanagawa Station in Yokohama on May 4. (Shuya Iwamoto)

YOKOHAMA--One day in late April, railway staffer Misaki Honma was taking down posters to promote travel packages and tickets inside the gates at JR Higashi-Kanagawa Station in Kanagawa Ward.

Many people are unable to go on trips and outings with the spread of the new coronavirus and the nation under a state of emergency.

Looking at a large blank space on the wall, Honma, 24, asked herself “what can I do" to help passengers find some solace amid the pandemic.

When she was talking with a co-worker, Honma learned that a message board was available at each station in the past with one installed at her station as well more than 20 years ago.

So, Honma hit upon reviving this traditional communications tool.

That type of communications method disappeared from stations across Japan as cellphones became common, enabling passengers to easily make contact with one another without message boards.

Honma, who was in her third year as a railway staff member, proposed her plan to reintroduce the messaging panel to her supervisor, believing it would “provide comfort to those visiting the station.”

Soon after gaining the boss’ approval, other young station workers helped her to create the message board. In addition, 52 station staffers suggested ideas to refine the project.

They bought black sheets at a fancy goods store, which they combined carefully to reproduce a large traditional station blackboard.

The finished messaging panel was set up on April 30 inside the ticket gate that is visible to staff, allowing station employees to prevent many people from writing on it simultaneously or posting obnoxious comments.

Written on the edge of the blackboard in chalk--a style of communications board that could be found everywhere in those days--is a notice that “the written content will be erased in six hours.”

A bottle of antiseptic was placed by the chalk for passengers to wash their hands before working on the board.

Although many citizens are currently teleworking and mostly refraining from venturing out unless necessary, many commuters still use Higashi-Kanagawa Station to transfer between the Keihin-Tohoku and Yokohama lines.

Many of the notes written in the afternoon of May 5 represent people’s strong aspirations to “return to a normal life,” “travel on the Seishun 18 flat-rate ticket as early as possible” and “drink at pubs.” Some also expressed their “gratitude to station staff.”

When Honma and her colleagues found a comment saying, “Thank you, station staff, and the project is very nice,” they shared their joy with each other.

The most memorable message, according to Honma, was, “I want to return to my hometown.”

Honma, who hails from Niigata Prefecture in northern Japan, formerly traveled to her family home to see her relatives and friends at least once a month. But the virus outbreak made it impossible for her to make any visits.

“Everyone feels the same,” she said. “It (the messaging board) gives me encouragement to keep working hard.”

Stationmaster Tomoya Maru, 45, said he wants to keep the blackboard available for commuters as long as possible.

“The message panel was created jointly by station staff members with all their hearts,” said Maru. “I will improve the station so passengers can use it with warm feelings.”