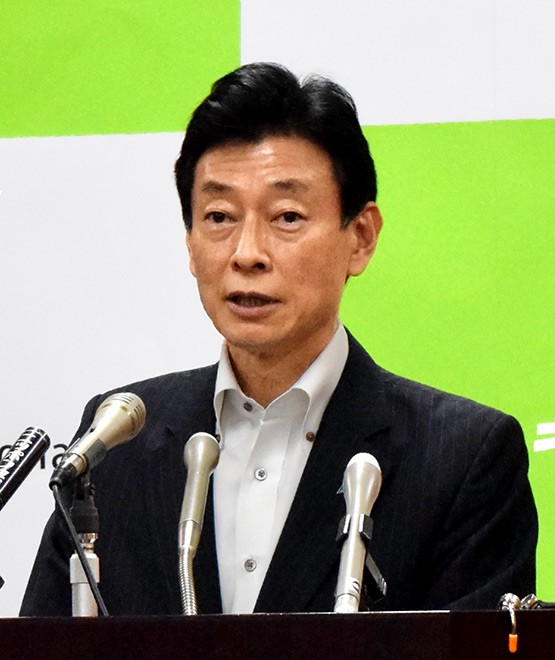 Yasutoshi Nishimura, the minister in charge of the new coronavirus measures, tells a news conference May 7 that some prefectures may be removed from the state of emergency over the coronavirus pandemic. (Tomohiro Yamamoto)

Japan might lift the state of emergency for 17 prefectures that have had no new COVID-19 cases in the past week, allowing them to ease their “stay home” policies and reopen public venues.

Yasutoshi Nishimura, the minister in charge of measures to battle the novel coronavirus, said May 7 the government will seek the opinion of its expert panel around May 14 over the early lifting plan.

For the past week, they have reported no new confirmed infections.

“If such a situation continues in the prefectures, we may consider putting them out of the state of emergency while hearing the experts’ views,” Nishimura said at a news conference.

Other prefectures have reported one or two new cases every now and then.

Nishimura said the government will look into the total infection numbers in those prefectures over the most recent two weeks, as well as other data and the experts’ assessment, before deciding whether the state of emergency can be lifted for them.

The government plans to announce the criteria for lifting the state of emergency before May 14, Nishimura said.

As examples, he cited the accumulated total of infections, the ability of the public health care system to cope with COVID-19 patients, and the ratio of patients whose infection routes are unclear.

The state of emergency through May 6 was first declared on April 7 for seven prefectures, but it was expanded to cover the entire nation on April 16.

The government on May 4 announced the state of emergency period would be extended to the end of May.

Tokyo, Osaka and 11 prefectures with large urban centers have been designated as requiring stepped-up anti-coronavirus measures since April 16.

Nishimura said the same criteria will be applied to those 13 designated prefectures when the government weighs the option of allowing them to reopen.

(This article was written by Tomohiro Yamamoto and Ayako Nakada.)