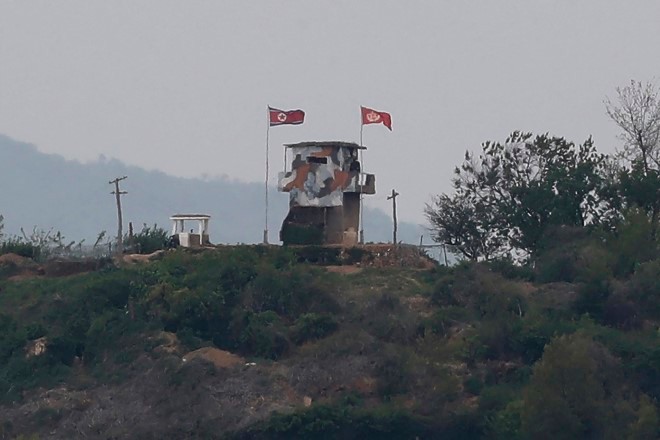 A North Korean flag flutters in the wind at a military guard post in Paju, at the border with North Korea, on May 3. (AP file photo)

SEOUL--North Korea threatened Friday to retaliate against South Korea for “reckless” military drills near their disputed sea boundary, but the South denied any training in the immediate area, the scene of several bloody naval skirmishes in recent years.

The wrangling came five days after South Korea accused the North of initiating an exchange of gunfire along their land border. No casualties were reported, but the incident was a reminder of persistent tensions on the peninsula.

North Korea’s Ministry of the People’s Armed Forces accused South Korea of mobilizing fighter jets and warships for drills on their western sea boundary on Wednesday.

“Such reckless move of the military warmongers of the south side is the height of the military confrontation,” it said in a statement carried by North Korean state media. “This is a grave provocation which can never be overlooked and this situation demands a necessary reaction from us.”

South Korea’s Defense Ministry said the drills didn’t break the agreements because they took place in its western waters about 300 kilometers from the sea boundary. A ministry official, requesting anonymity because of department rules, said South Korea has been maintaining military readiness without violating the 2018 agreements.

On Sunday, South Korea said several bullets fired from North Korea struck one of its front-line guard posts and South Korean soldiers fired 20 warning shots in return. South Korea sent a message asking North Korea to explain the incident, but the North has yet to reply, the Defense Ministry said.

Relations between the two Koreas improved significantly in 2018 as their leaders held three rounds of talks. But much of the rapprochement stalled as broader diplomacy between North Korea and the United States came to a standstill because of disputes over the North’s nuclear disarmament.

The Koreas have been divided along the world’s most heavily fortified land border since the end of the 1950-53 Korean War. Their poorly marked western sea boundary witnessed naval clashes in 1999, 2002 and 2009. Attacks blamed on North Korea in the area in 2010 killed 50 South Koreans--46 on a warship and four on a border island.