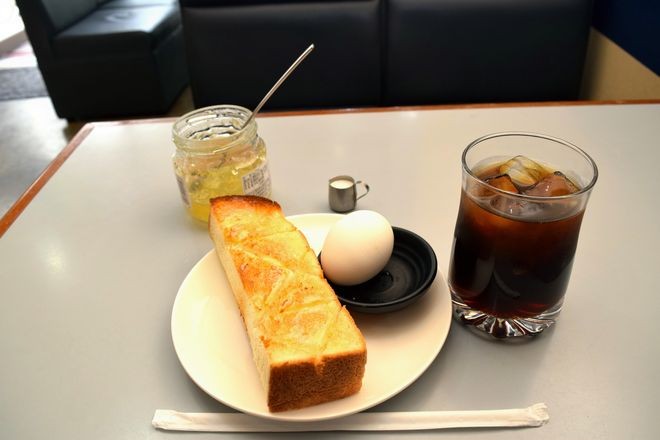 As a morning tradition, toast and a boiled egg are served with a cup of coffee at a cafe in Nagoya. (Masahiro Iwao)

Most of the time, the coffee comes with a slice of thick toast and a boiled egg.

Free breakfast with a cup of coffee has long been a culinary tradition in Japan’s central Tokai region and particularly in Nagoya, the capital of Aichi Prefecture.

But the prolonged novel coronavirus pandemic has creamed Coffee House Tony and other local cafe businesses, endangering the beloved custom.

The outbreak has forced owners of these cafes to wake up and smell the coffee.

“Regulars to our cafe, particularly the elderly ones, have stopped coming,” Satoru Kanai, 31, owner of Coffee House Tony, said anxiously.

The Aichi prefectural government on April 10 declared a state of emergency on its own, urging residents to stay home.

Since then, Kanai said he has suffered an 80 percent drop in business.

Several regulars who live in the neighborhood still turn up before 8 a.m. to be treated to a breakfast known as “morning.”

But office workers and senior citizens have disappeared from the streets, avoiding the risk of exposure to the deadly virus.

Kanai took over the cafe from his parents, who opened Tony about 40 years ago.

The cafe has served as a neighborhood meeting spot for local seniors to socialize, checking in to see how their old friends are doing.

With offices in the area closed, Tony has become empty during lunchtime as well.

“All the pedestrians in front of the cafe were suddenly gone,” Kanai said. “I wonder when they will come back? Or, should I ask, will they ever come back?”

He hopes to make ends meet by offering delivery and other services.

“It’s hard to see a bright future, but I have no choice but to hang in there and survive as a cafe loved by locals,” Kanai said.

Many fellow cafe owners in the region share his concern.

Samon Funahashi, 75, who chairs a trade association of cafes and other similar businesses in Aichi Prefecture, said, “Nagoya’s food culture, including its breakfast tradition, is facing a crisis.”

In the Tokai region, it is common for residents to go to a cafe to have breakfast and socialize with their neighbors and friends.

Many cafes offer free snacks with a cup of coffee, such as peanuts and sweetened azuki beans, attracting customers even after breakfast hours.

According to a budget survey of a household of two or more conducted by the internal affairs ministry, annual spending on coffee, tea and snacks per household in the city of Gifu was 14,522 yen ($137) on average during a period from 2017 to 2019, the highest among prefectural capitals in the nation.

However, the pandemic has deprived people in the region of such pleasurable diversions from their daily lives.

Funahashi said the trade association has received requests for assistance and consultation from cafe owners who are struggling to pay their rents.

The pandemic is having a detrimental effect on the region’s breadmaking industry as well.

However, sales fell about 40 percent as of late April from a year earlier.

Some cafes have resumed operations in May, but the pandemic will likely change the lifestyles of many people.

“Things may never return to normal again,” a representative of the bread maker said.

The representative is also worried that some elderly cafe owners may go out of business.

“I want to find some way to maintain the culture, but ...,” the disheartened representative said.

The cafe culture in the region dovetailed with the nation’s rapid economic growth, as trade association membership reached around 4,800 at its peak in 1988.

But as the owners aged, the membership has dwindled to less than 1,300 today.

The pandemic added insult to injury.

“I worry some owners might get out of the cafe business,” Funahashi said of the possible adverse effects. “I just hope we get some help from governments and manage somehow to sustain the regional cafe culture."

(This article was written by Masahiro Iwao and Chie Kohara.)