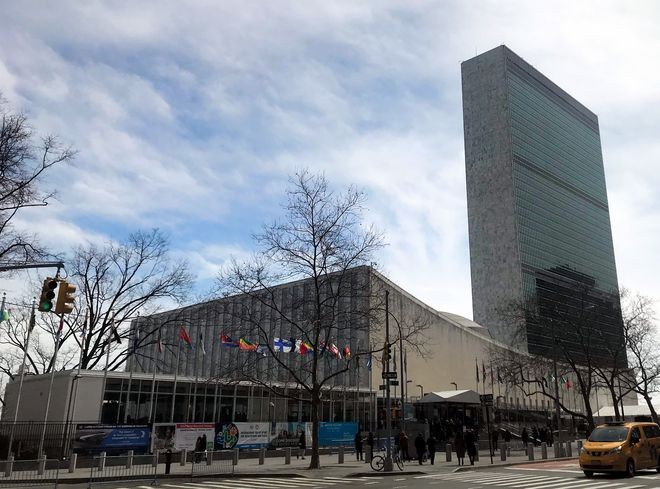 NEW YORK--China and the United States both supported a draft United Nations Security Council resolution confronting the coronavirus pandemic on Thursday and it was "shocking and regretful" that Washington changed its mind on Friday, a Chinese diplomat said.

A U.S. diplomat refuted the Chinese comment, saying there was no U.S. agreement on the text.

For more than six weeks the 15-member council has been trying to agree on a text that ultimately aims to back a March 23 call by U.N. chief Antonio Guterres for a ceasefire in global conflicts so the world can focus on the pandemic.

But talks have been stymied by a stand-off between China and the United States over whether to mention the World Health Organization. The United States does not want a reference, China has insisted it be included, while some other members see the mention - or not - of WHO as a marginal issue, diplomats said.

Washington has halted funding for the WHO, a U.N. agency, after President Donald Trump accused it of being "China-centric" and promoting China's "disinformation" about the outbreak, assertions the WHO denies.

It appeared the Security Council had reached a compromise late on Thursday, diplomats said and according to the latest version of a French- and Tunisian drafted-resolution.

Instead of naming the WHO, the draft referenced "specialized health agencies." The WHO is the only such agency. But the United States rejected that language on Friday, diplomats said, because it was an obvious reference to the Geneva-based WHO.

"The United States had agreed to the compromise text and it's shocking and regretful that the U.S. changed its position," said the Chinese diplomat, speaking on condition of anonymity, on Saturday, adding that China supported the draft.

The U.S. diplomat, also speaking on condition of anonymity, said there was no U.S. agreement on the text, which the U.S. mission to the United Nations had sent to Washington for review on Thursday.

Diplomats said that during negotiations both China and the United States had raised the prospect of a veto on the issue of whether WHO is mentioned or not. A resolution needs nine votes in favor and no vetoes by France, Russia, Britain, the United States or China to pass.

A State Department spokesperson said on Friday the United States had worked constructively and accused China of repeatedly blocking compromises during negotiations.

While the Security Council - charged with maintaining international peace and security - cannot do much to deal with the coronavirus itself, diplomats and analysts say it could have projected global unity by backing Guterres' ceasefire call.

French U.N. Ambassador Nicolas de Rivière on Friday said "we are still trying to achieve a positive result and trying to see if there is a possible compromise."