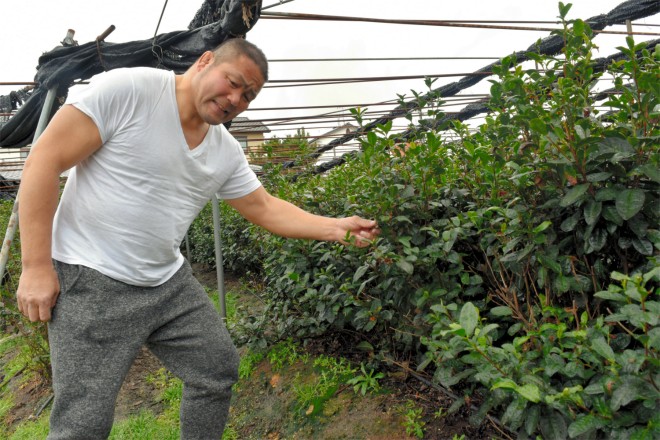 Nakanishi, 53, who was nicknamed by fans as "yajin" (wild one) for his world-class strength and crowd-pleasing moves, now lives at his family home here to help them cultivate tea while promoting the charms of pro wrestling.

"I have trained my body all these years, so I hope I can be of use to society in some way," Nakanishi said, adding that he still continues to work out.

The grappler had his farewell bout on Feb. 22 at Tokyo's Korakuen Hall when two teams of four competed in a tag match in the main event of the day.

As fans chanted his name, Nakanishi showed off his Argentine backbreaker by placing his opponent face-up across his own shoulders. He also performed other special moves to wow the crowd.

But in the end, Nakanishi fell prey to Kazuchika Okada and Hiroshi Tanahashi, who lead the current professional wrestling world in Japan. He was pinned for a count of three, losing his final match.

MIRACLE TO BE OLYMPIAN

Nakanishi was born in Kyoto's Fushimi Ward in 1967 in a family who has been growing tea for generations in an area near the border to Uji.

"When he first joined the club, he only weighed 70 kilograms, at most. I told him to eat well and get bigger," said Hidetomo Suzuki, 69, who served as adviser to the wrestling club at the time. "He wasn't a skillful wrestler, but he was honest and earnest."

Nakanishi went on to win the all-Japan championship four times in a row while he was attending Senshu University in Tokyo.

After working as a public servant, he joined the New Japan Pro-Wrestling Co. (NJPW) on the advice of Riki Choshu, a veteran wrestler who also graduated from Senshu University, and Hiroshi Hase, who is now a Lower House member. The following year, in 1992, the grappler competed in the Barcelona Olympics, but lost in a preliminary round.

"I was carried away by the excitement, and it was a disaster," Nakanishi recalled. "It was a miracle just to compete in the Olympics."

Nakanishi turned pro in the same year at age 25. It took a while for him to distinguish himself, but he defeated Keiji Muto, aka The Great Muta, in 1999 to become the champion of the G1 Climax tournament, which is a major competition organized by the NJPW every summer.

He went on to hold the wrestling promotion's signature title. At a billed height of 186 centimeters and a billed weight of 120 kg, he remained a mainstay wrestler for a long time.

SERIOUS INJURY IN THE RING

What triggered his retirement was a cervical spine injury he suffered during a match in Kyoto in June 2011. The opponent forced a throw against Nakanishi, who slammed head first onto the mat and was rushed to a hospital.

"When I watched the footage later, there were some moments that I had no recollection of," the wrestler said. "I think I nearly died."

He accepts it was his fault, not the opponent's, for his injury.

"Professional wrestlers put their lives in danger. I have seen so many wrestlers in the older generations who were left incapacitated or had no choice but to leave the ring for good. Still, I made an unwarranted assumption and didn't practice hard enough. It was a well-deserved punishment," Nakanishi said.

There was a time when it was feared he would struggle with the aftereffects of the injury in his daily life, let alone whether he could make a comeback.

He had surgeries and physical therapy sessions at hospitals in Kyoto and Gifu prefectures and Tokyo, and it took about 500 days for Nakanishi to return to the ring.

However, he felt frustrated because he couldn't move his body the way he wanted.

"Japanese professional wrestlers have distinct aesthetics to prove their worth by absorbing attacks from their opponent," Nakanishi said. "We must inspire the audience by making them feel, 'That guy can take that many attacks? He's definitely special.' I had been fooling myself to continue, but I knew it better than anyone else."

After retirement, Nakanishi has been working at an Uji tea plantation managed by his father Masanori, 89, and an older brother. Masanori and Mitsuko, his mother who passed away a few years ago, had supported Manabu since he was a student, covering expenses for his overseas tours and other purposes. They also helped him in many ways after Nakanishi turned pro.

"He may have performed poorly in wrestling, but he is kind and doesn't talk ill of others," Masanori said. "I'm proud of my son."

With the Tokyo Olympics officially postponed until 2021, the former Olympian is sympathetic toward athletes, saying that they will likely have difficulties adjusting their mental and physical conditions.

Nakanishi was planning to pursue a career related to professional wrestling while he helps his family's business. But he has received no job offers because of the spread of the novel coronavirus.

"We absolutely need fun things to live in this tough world. There is no sport that is more fun than professional wrestling," Nakanishi said.