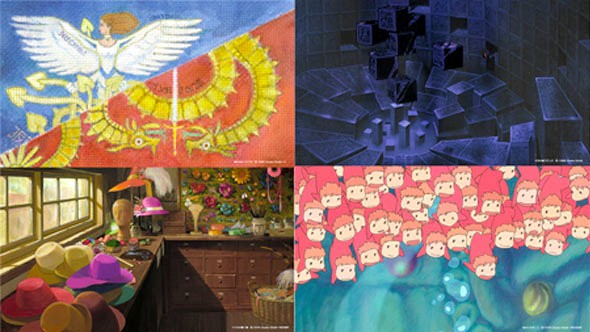 Backgrounds for online meetings released by Studio Ghibli, clockwise from top left, "Nausicaa of the Valley of the Wind," "Castle in the Sky," "Ponyo" and "Howl's Moving Castle" ((C) Studio Ghibli)

Studio Ghibli Inc. has released free background wallpapers to let the increasing number of people using video chats to work from home or take online classes amid the novel coronavirus pandemic feel like they're part of its animated films.

The world-renowned anime studio initially released eight free wallpapers themed on its films including "Spirited Away" and "Ponyo," which can be used as virtual backgrounds for online meetings. More themes are being added, the company said.

Two of Japan's major broadcasters also released images from their popular productions that can be used as backgrounds for online meetings.

The snapshots feature a number of memorable locations from the series including the large hall of the Tokyo Central Bank, where protagonist Hanzawa forces the bank's managing director, Owada, to kneel on the ground and prostrate himself to apologize for his actions.

Another is the conference room at the Tokyo Central Securities to which Hanzawa is ordered to be transferred.

The broadcaster is also distributing photos from other popular shows for free via Twitter.

They include a room in which Yui Aragaki and Gen Hoshino perform the "Koi Dance" in the ending sequence of the drama series, as well as the room of Nagi Oshima, played by Haru Kuroki, featured in the drama "Nagi's Long Vacation."

Nippon Broadcasting System Inc. posted images of a radio booth and a background panel bearing the logo of its radio show "All Night Nippon" on its Twitter account that allows users to appear to be radio personalities when they join online meetings.