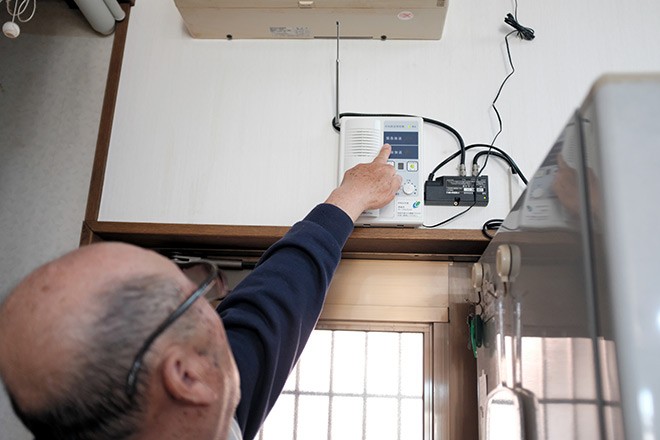 A resident points to a public address system installed at each home in Iki, Nagasaki Prefecture, to announce each new confirmed case of novel coronavirus infection. (Mizuki Enomoto)

With only one doctor and two nurses for the 300-strong population, an outbreak of novel coronavirus infection could prove disastrous for residents of outlying Mikurajima island south of Tokyo.

Not surprisingly, residents were thrown into a panic May 9 after the first confirmed local case of COVID-19.

Local authorities called for calm via a public address system, and advised residents with health problems to contact the public health center in Miyake village, located in nearby Miyakejima island.

Mikurajima has no public health center, so when residents fall sick they have to contact health authorities in Miyakejima.

But even Miyake village is not prepared for conducting diagnostic testing.

This situation is mirrored across outlying islands of Japan where only a limited number of hospital beds are available to treat patients with the infectious disease. Not only that, personnel and equipment resources are minimal.

These islands by and large have no way of coping with widespread COVID-19 infections.

On Mikurajima island, the residents all live within a 1-kilometer radius. The island has only one clinic, which has no facility to treat an infected individual.

One of the nurses was instructed to stay home after being in contact with the infected person, a 78-year-old man who was airlifted from the island and hospitalized on the mainland.

Since April, village authorities have requested tourists to refrain from visiting so as to reduce the risks of exposing residents to the virus. They also requested people returning to the island to self-isolate for two weeks after their return.

After the first case was confirmed, local officials began distributing 10 face masks to each resident from the village’s stockpile. Residents were also instructed to call the doctor first if they have a health problem.

“The village will not be able to cope with a second or third patient, given the limited scope of the local health care system,” said a member of the village assembly.

The several eateries on the island remain shut, and a resident involved in island tourism said it may be difficult for the operators to reopen in summer.

In Iki, a city with a population of 26,000 on Ikinoshima island in Nagasaki Prefecture, the confirmation of five patients in succession in early April caused alarm among residents.

A 77-year-old resident admitted to getting the jitters each time the city’s public address system announced new cases and the test results of people who were in contact with the infected individuals.

“I am scared that somebody in my neighborhood may test positive,” the man said.

There are about 50 inhabited islands in Nagasaki Prefecture, but none of them is equipped with Extracorporeal membrane oxygenation (ECMO) equipment used to treat a patient in critical condition.

A woman in her 70s whose health condition quickly deteriorated was airlifted by helicopter to the main island of Kyushu by the Self-Defense Forces.

The health care system is also limited on Okinoerabujima, a small island about 500 kilometers south of Kagoshima, Kagoshima Prefecture.

When an islander tested positive in April, the man was placed in a hospital room equipped to deal with infectious diseases.

But is it the only room in the hospital to treat such cases. The hospital also had to take protective steps to ensure the virus was not transmitted to other patients and staff, in addition to testing people who were in close contact with him.

“We cannot handle more cases,” said an official at the hospital. “If an outbreak occurs inside the hospital, the hospital will be paralyzed.”

When the health condition of patients being treated in outlying islands starts to go downhill rapidly, helicopters with the SDF and the Japan Coast Guard are deployed to airlift them to a facility in Kagoshima, a trip that takes three hours from Okinoerabujima and neighboring Yoronjima islands.

Kagoshima prefectural authorities set aside funds in the supplementary budget in April for the purchase of isolation transport bags for infected patients to protect helicopter crew members from infection while transporting them.