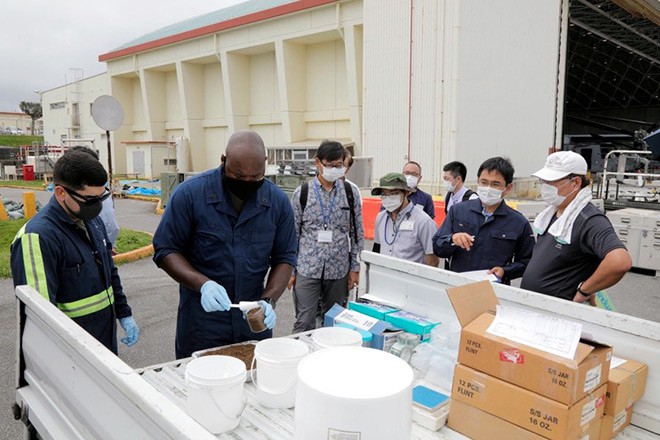 A worker affiliated with U.S. military, second from left, divides soil taken from the U.S. Marine Corps Air Station Futenma in Ginowan, Okinawa Prefecture, while Japanese representatives look on May 11. (Provided by the Defense Ministry)

U.S. authorities on May 11 caved in to repeated requests from Japan to provide soil samples from a leak of potentially toxic firefighting foam at a military base in Okinawa Prefecture.

The gesture is expected to help resolve concerns about the scope of contamination involving a compound known to cause cancer.

The samples were provided after the U.S. military rejected requests from prefectural authorities and the Ginowan city government for access to the soil cleared after the April 10 spill at the U.S. Marine Corps Air Station Futenma in Ginowan.

The leakage occurred at a hangar in the base, which is surrounded by a crowded residential area.

U.S. officials disclosed that about 227,000 liters of foam leaked, of which about 144,000 liters ended up flowing in a neighborhood ditch and released potentially harmful substances into the air.

The firefighting foam contains perfluorooctanesulfonic acid (PFOS), a compound known to cause cancer through prolonged exposure in natural surroundings.

The manufacture and use of PFOS was banned in principle by an international treaty in 2009. Japan basically prohibits the manufacture, use and import of the compound.

The U.S. military cleared the soil from an area measuring about 65 square meters and 15 centimeters deep around the unlocked hangar on April 24, citing fears of contamination.

According to prefectural and city officials, the U.S. side provided samples of the cleared soil, as well as soil from eight locations in the vicinity of the ditch where the foam flowed.

The Japanese government and Okinawa Prefecture will scrutinize the samples, together with water samples provided on April 21, to assess the extent of the pollution.

The U.S. side will also conduct its own investigation.

Ginowan-based firefighters mostly collected the foam that spilled outside the base.

High concentration of PFOS have also been detected in the neighborhood of other U.S. bases, such as Kadena Air Base in Okinawa Prefecture and Yokota Air Base in Tokyo.