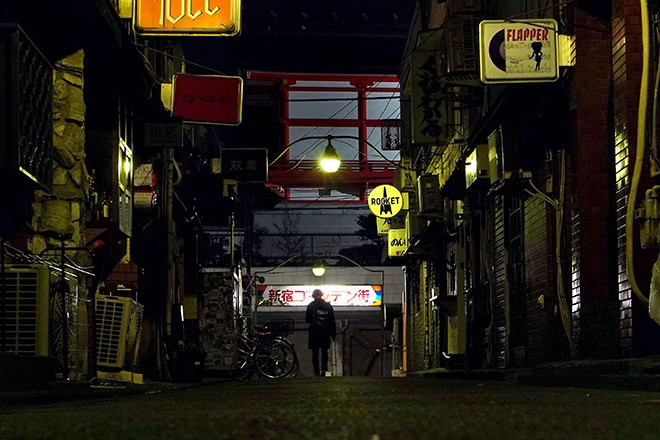 The Golden Gai entertainment district in Tokyo's Shinjuku area has had fewer customers since the state of emergency was declared on April 7. (Nobuo Fujiwara)

The novel coronavirus has shattered a particular type of bar in Japan, disrupting a social form of entertainment described as vital for communities and leading to tragic consequences.

The “snack” bar industry has found itself in the crosshairs of government warnings concerning the further spread of the virus.

Snacks, in general, tend to be small bars that seat only about 10 customers. They fit the bill of places that the government wants people to avoid: unventilated, congested areas where close contact with others is highly likely.

Many snacks around the nation have shut down on the requests of prefectural governors during the pandemic. Their regulars now have to look elsewhere for a cozy and friendly place to imbibe, while the bar owners are losing income and in some cases their raison d’etre.

Snack bars were first established around the time of the 1964 Tokyo Olympics. The formal name stems from their offerings of some snacks to customers as a way to get around restrictions on bars operating late at night.

The female owners are usually called the “mama-san,” who not only provide food and drinks but also conversation or a sympathetic ear for customers who want to get something off their chest.

Many snacks also have a karaoke service, and regulars and the mama-san can often be heard belting out tunes together.

But this business model has made the bars particularly vulnerable in the pandemic.

Singing raises the possibility of potentially virus-infected droplets and other minute particles being spewed into the air.

And unlike some restaurants, most snacks do not have much in the way of items that can be sold in take-out services.

Snack owners are not the only ones who are longing for their operations to reopen.

“Some of my regular customers say to me, ‘Let me sing karaoke for two or three hours during the day,’” said a 79-year-old mama-san in Fukuoka city’s Tenjin district, the largest entertainment area on the main southern island of Kyushu.

Her snack, with 10 seats along the bar counter, is located on the first floor of a building housing various businesses. The mama-san has been operating the snack for more than 30 years.

The Fukuoka city government provides a subsidy for 80 percent of her rent.

“I am barely getting by,” she said. “But I cannot complain now because I started this business because I liked to interact with others.”

Customers generally frequent snacks for the conversation and karaoke, rather than the food and drinks normally found at other drinking establishments.

With their own long life histories, many mama-san have plenty of topics they can share with their customers.

But even the friendly conversations at snacks have been frowned upon in the government’s warnings about the novel coronavirus.

The government panel of experts dealing with the coronavirus outbreak on May 4 suggested new lifestyle practices, including taking meals sitting side-by-side rather than face-to-face and to concentrate on the food during meals rather than the conversation.

Like other businesses trying to cope with the pandemic, some snacks have held online parties, allowing individuals to connect with each other through videoconferencing apps for conversation and drinks.

But many snack owners are hesitant to go along.

Some just don’t have the computer skills to pull it off. Others point to the lack of intimacy normally found in snacks.

“I just do not feel comfortable in a virtual space,” one mama-san said.

A 55-year-old snack owner in Tokyo’s Ota Ward said the bars have been an important part of local communities.

“Anyone can, in principle, join the online snacks,” said the owner who lives above her first-floor snack in a residential district. “But I want to take care of my local customers.”

The owner of another snack is said to be suffering from psychological problems because of the shutdown.

Some of her neighbors said they believe the owner has lost her pride and her reason for living with the temporary closure of her business.

There are about 70,000 snacks in Japan, or about 15,000 more than the number of convenience stores, according to a Tokyo-based internet website that provides information about the bars.

Takuya Takada, 37, an executive with the company that operates the website, explained that disruptions to the unique characteristic of the snack sector could have ramifications for an entire district.

“In many instances, snacks are concentrated in certain buildings,” Takada said. “But if a domino effect occurs and snacks shut down one after another, the building owner may have to sell the building.”

Takada said some areas have turned into ghost towns because no one wanted to buy a snack-less building.

The financial burden during the pandemic has led some snack owners to commit suicide.

A 55-year-old singer who regularly traveled the snack circuit to promote new CDs said he knows of at least three mama-san who have killed themselves over the past two months.

“They were all so cheerful,” he recalled. “They continued to back me up even when I faced difficulties.”

He said he will never forget the mama-san who kept waving goodbye to him after he had ended his promotional work at her snack.