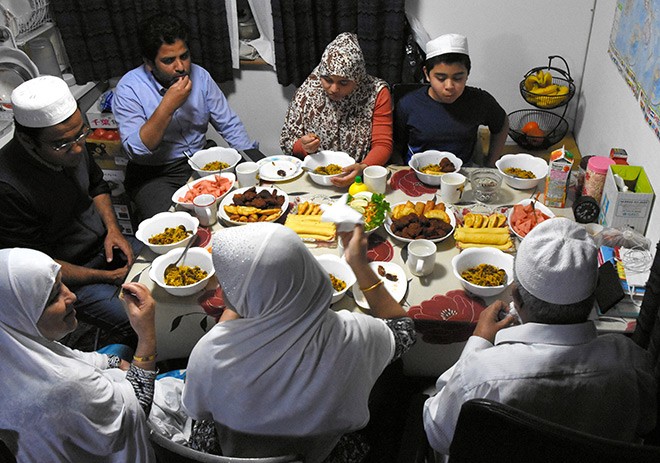 Mohammed Salim, in blue shirt in left background, shares a post-sunset meal with his family in Ichikawa, Chiba Prefecture, on May 10. (Susumu Imaizumi)

ICHIKAWA, Chiba Prefecture--Mohammed Salim is despondent this Ramadan, the traditional month of fasting for Muslims.

Normally, Salim would be meeting up with his friends at a nearby mosque and enjoying a lively meal with them after sunset.

But not this year. Instead, he dines quietly with his family at home due to fears of the spread of COVID-19 infection.

The 45-year-old Salim, a member of the oppressed ethnic Rohingya minority from Myanmar who now lives here, said this is the first time in his life to observe Ramadan without going to a mosque. Even during the darkest days of the military junta in Myanmar, he was not denied that.

The family passes uneasy days in silent prayers to Allah to be merciful, wondering how long their lives will remain on hold.

On May 10 at 6:38 p.m., Salim and his family offered sunset prayers, their hands spread in front of their faces in the traditional style of worship, at their home close to Gyotoku Station in Ichikawa, Chiba Prefecture.

Laid out on the table, already, were spicy fried chickpeas, pasta, coconut crepes and brightly colored fruits in preparation for Iftar, the post-sunset meal.

“I feel sad (at not being able to go to the mosque) because this opportunity means so much to us,” Salim said.

Salim was born and raised in a village in western Myanmar close to the border. At the age of 14, he high-tailed it to neighboring Bangladesh to escape a crackdown on the Rohingya people, and went on to study at a university in Libya. He arrived in Japan in 2003 through family connections but his application for refugee status was rejected.

To make ends meet, Salim found work at a factory in Tatebayashi, Gunma Prefecture, and later with the Libyan Embassy, along with other jobs. He obtained long-term resident status and moved to Ichikawa in 2007.

The following year, he married Hajera, 33, a Rohingya in exile in Bangladesh, whom he got to know through his parents, and they set up home in Japan.

They have three sons of kindergarten and elementary school age, all of whom, in Salim’s words, are native-born Gyotoku kids. The family now lives with Salim’s parents, whom they brought here in 2017 as persecution against Rohingya intensified in their homeland.

The family’s income mostly derives from a halal grocery and kebab restaurant that Salim operates. The restaurant's sales have fallen by half as customers self-isolate at home for fear of becoming infected with COVID-19.

“That’s not enough to even pay my shop rent,” Salim said of the financial hardship the family now faces. “We can hardly make a living if things continue like this.”

With schools closed for the time being under an extended state of emergency, Hajera expressed concern about her children and the stress they must feel at being forced to remain home.

“Our children are proficient in Japanese because they were born and raised in Japan,” Salim said. “I dearly hope they will also learn the Rohingya language and Islamic teachings, but they are now behind in their schoolwork.”

Like all residents in Japan, the family is looking forward to receiving across-the-board cash payments of 100,000 yen ($930) per head under a government emergency economic package to mitigate the effects of the health crisis.

“I pay more than 1.5 million yen in tax a year,” Salim said. “So, I am so thankful for the fairness of the system that allows us to receive the payments.”

Myanmar and Bangladesh are among countries that obliged people to remain at home except for essential outings. Although Salim and his family are entitled to live in Japan for the time being, there is little prospect they will be able to return to their homeland anytime soon.

Salim said he prays daily that the new coronavirus pandemic will ease.

“May the world be free of all conflicts. May everybody be able to live a peaceful life,” he said.

Rohingya, although indigenous to western Myanmar close to the border with Bangladesh, are denied citizenship in a country that is nearly 90 percent Buddhist and face sustained discrimination and persecution.

In January, the International Court of Justice ordered the government of Myanmar to prevent actions that may amount to genocide. The Myanmar government denies it has such an ethnic cleansing policy.

Many Rohingya are still living in exile as refugees.