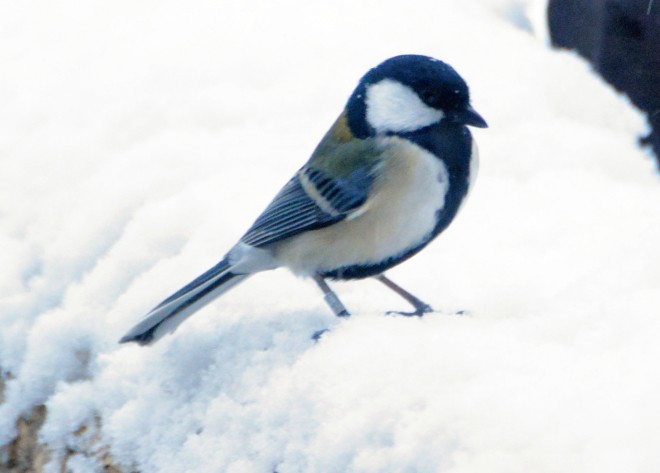 Transliterated into Japanese, "tsutsu-pee, tsutsu-pee" is how the great tit sings.

This cheerful, high-pitched chirp has become something I look eagerly forward to hearing every morning. The bird sports a necktie-like black stripe running down its breast. On lucky days, I get to see one perched on a power transmission line.

Birds don't sing to entertain us humans, needless to say. Their call may be for proclaiming ownership of a territory, or for courting a member of the opposite sex.

When not chirping to convey a message, the call is referred to as "ji-naki" in Japanese, and many birds sound quite subdued in that mode.

In Noah Strycker's "The Thing with Feathers," I read about the males of a certain species of birds whose courtship behavior verges on the creation of a form of art.

The bowerbird, which is indigenous to Australia among other regions, assembles twigs into a structure resembling a hut, and embellishes it with seashells, nuts, glass fragments and other items, apparently to impress and woo a female.

Strycker once came across a bowerbird in the process of creating its masterpiece. He recalls in his book that the bird stepped back to gaze at its work from various angles, and pecked at it from time to time, just like an artist correcting flaws in their painting.

The author effectively notes it is too much of a stretch to ascribe artistic pursuits to humans only.

Birdcalls have been likened to songs and music from olden times. Pablo Picasso (1881-1973) was quoted as saying with irony, "Everyone wants to understand art. Why not try to understand the song of a bird?"

He must have believed that works of art, as well as the beauty of nature, ought to be loved unconditionally.

It's not a bad idea to become a bandwagoner birdwatcher in search of a neighborhood "musician." In Japan, it's Bird Week until May 16.