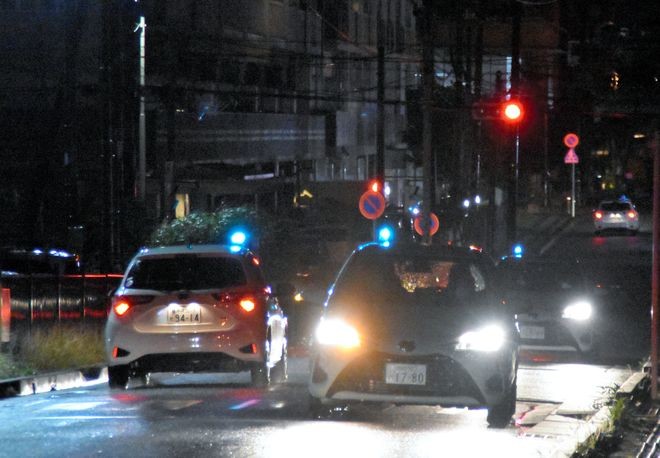 Patrol cars return to a parking lot near the Cabinet Office’s Okinawa General Bureau on April 26 in Naha. (Shinichi Fujiwara)

URUMA, Okinawa Prefecture--A special patrol unit set up to crack down on crimes committed by U.S. military personnel has been an expensive bust so far.

On the initiative of Chief Cabinet Secretary Yoshihide Suga, the safety patrolling team was introduced in June 2016, a month after a former civilian employee of the U.S. military was arrested on suspicion of clubbing, choking and stabbing to death a woman who was taking a nighttime stroll here.

A total of 1.9 billion yen ($17.6 million) has been injected into the patrol project up to fiscal 2018, but it has failed to curb the crimes and ease safety concerns.

In 2016, 23 criminal offenses were committed by U.S. military personnel, civilian employees and their family members. The number more than doubled to 48 in 2017, and eased to 31 in both 2018 and 2019, according to Okinawa prefectural police.

One reason given for the disappointing results is that the patrols must deal with a wide range of offenders, most of them Japanese.

“The patrolling route has covered residential areas often targeted by sneak thieves and even a mango farm at the prefectural police’s request,” said a private security guard who has been involved in the program. “Although we dealt with 800 incidents annually, we stopped a fight involving a foreigner in only one case.”

According to a representative of the Cabinet Office’s Okinawa General Bureau, the patrol unit, "right from the start, was not designed to monitor only those connected to the U.S. military.”

However, local residents have deemed the endeavor as “part of efforts to prevent a recurrence of crimes by personnel related to the U.S. military,” taking into account how it started.

The Uruma woman was killed on April 28, 2016, and her body was abandoned in a thicket in Onna in the prefecture. The culprit has been sentenced to life in prison for murder and other charges.

Around that time of the death, an Upper House election campaign was just around the corner. A team headed by Suga to prevent offenses in Okinawa moved quickly to “ensure the safety and security of prefectural residents.”

According to the Okinawa General Bureau, 75 vehicles are used for two-person patrols from 7 p.m. through 10 p.m. every day. These patrols are conducted by part-time workers at the bureau and the Okinawa Defense Bureau.

In addition, 25 two-person cars from private security companies make the rounds between 11 p.m. and 5 a.m.

Under the project, any troubles detected by the patrols across Okinawa’s main island are reported to police. By the end of February this year, 1,223 cases had been shared with police.

Of them, 961 involved drunk individuals, accounting for 78.6 percent.

The number of incidents and accidents involving people connected with the U.S. military totaled eight.

Kyoji Shimabukuro, 71, head of a residents’ association of Okinawa city’s Goya district near the U.S. Kadena Air Base, questioned the program’s effectiveness. He said women are still refraining from going out in the evening.

“It cannot be said that the project has given us a sense of security,” Shimabukuro said.

“We need to thoroughly examine how the program is helpful in preventing offenses by U.S. military servicemen and civilian employees,” Tamaki said at a news conference on April 24.