The Face Four facial recognition system can quickly check whether a person develops a fever or wears a mask. (Video by Masashi Kisanuki) 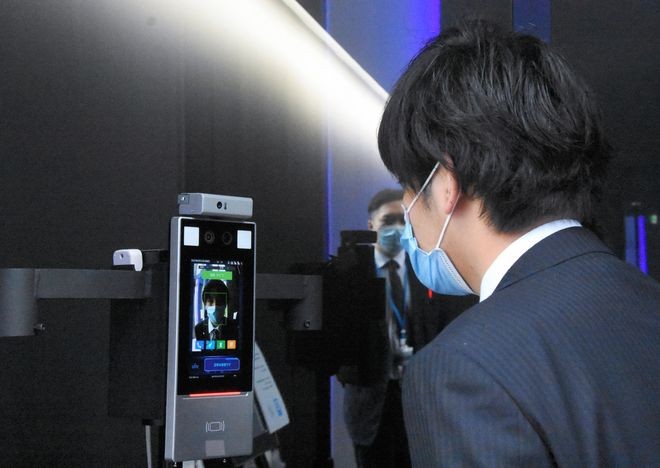 KANAZAWA--A local tech company has developed a facial recognition system that can ID people wearing face masks and check if they have a fever, anticipating demand to grow for machines that can quickly filter out sick employees.

Daiwa Tsushin Co., a cellphone and security device maker based in the capital of Ishikawa Prefecture, developed the Face Four recognition system to help prevent the coronavirus from spreading at offices.

When a person stands in front of the equipment at a building’s entrance, the machine makes an infrared scan of their body, which its artificial intelligence unit analyzes to determine if they have a fever. The results are shown in real time.

If the person scanned is not wearing a mask, the system will automatically instruct them to put one on.

When people registered in the system wear face masks, the machine determines their identities based on the distance between eyes, as well as by examining facial contours and other features.

It records their body temperatures and the time at which they enter or exit the building.

Up to 10,000 users can be registered into the system for identification.

The health check can be done at a distance of up to one meter from the device; the person being scanned does not have to touch any of the equipment.

Hidenari Iwamoto, 54, president of Daiwa Tsushin, came up with the idea for the system after he visited a town in China's Guangdong province on a business trip in early January.

Fever examinations started across China later that month as the virus spread there.

Iwamoto said he then thought "demand for body temperature checking will also grow in Japan," so he started developing the new equipment.

The company donated Face Four machines to the Ishikawa prefectural government and Kanazawa city in April.

Daiwa Tsushin has already received orders for 500 units of the Face Four from utility companies, banks and other businesses throughout the nation, according to company representatives.

It is looking to spread the equipment to airports and railway stations in the future as well.

"We will engage in development so that body temperature checks can be carried out everywhere, like overseas," said Iwamoto.