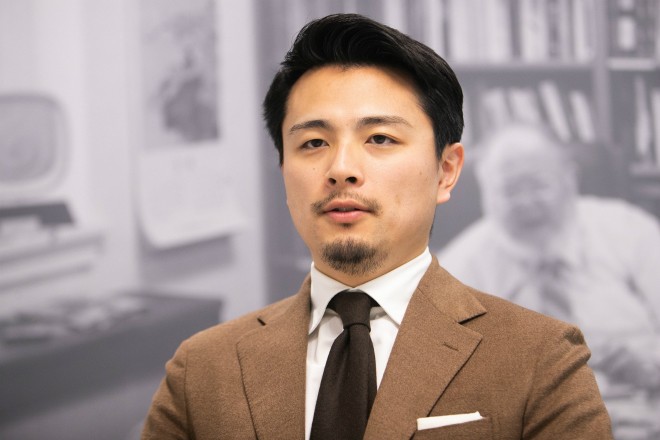 Masashi Murano, a fellow at the Japan Chair of the Hudson Institute, a conservative think tank in Washington, D.C., responds in an interview with The Asahi Shimbun. (Photo by Yuko Lanham)

As Japan focuses on the novel coronavirus outbreak, China, which claims to have contained the virus, is becoming more aggressive in its maritime activities, including sending its aircraft carrier group into the Western Pacific.

Additionally, China has been steadily developing intermediate-range missiles, which the United States doesn't currently possess. Unlike naval vessels, Chinese missile forces are not as visible to the public, but they pose a significant threat to Japan.

How should Japan and the United States counter China? In an interview with The Asahi Shimbun, Masashi Murano, a Japan Chair fellow at the Hudson Institute, a conservative think tank in Washington, D.C., was asked about what measures Japan should take.

Murano is the Japanese native fellow at the newly established Japan Chair at the Hudson Institute, where he conducts research on deterrence strategies and Japan-U.S. security cooperation. He emphasized that Japan was lacking in constructive discussions about national security issues.

Question: China is said to have approximately 2,000 intermediate-range missiles that can reach anywhere in Japan. On the other hand, the United States doesn’t have any ground-based missiles with a range of between 500 to 5,500 km due to the Intermediate-Range Nuclear Forces Treaty with Russia, which expired last August. What is your view about the “strike gap” between the United States and China?

Murano: In the first place, Japan's missile defense posture has been designed to deal with North Korea. It is technologically and financially impossible to defend against the massive Chinese missile arsenal without suffering any damage. Even if China attacks Japan with numerous conventional missiles, it is unlikely that the United States would immediately retaliate with nuclear missiles. To make matters worse, at this moment, the United States doesn’t have intermediate-range missiles with conventional warheads that might be useful for a rapid response. We must realize that there is a huge strike gap between the Japan-U.S. alliance and China.

Given this circumstance, Japan and the United States need a balanced combination of defensive and offensive capabilities against military assets to effectively counter Chinese missiles.

Q: During the military parade for the ceremony held last autumn to mark the 70th anniversary of China’s founding, many of the most advanced missiles were on display. When I served as Beijing correspondent in 2009, I covered the military parade for the 60th anniversary, which was described as “the largest in history.” But I was very surprised by the latest military parade because not only were there much larger missiles, but there were also some missiles I had never seen before. What missiles did you most focus on?

Murano: I focused on the DF-17 hypersonic glide missile. It is difficult to predict its trajectory because once launched, the DF-17 can change its flight course while gliding at high speed. It is also hard to intercept because of its extremely high speed, which would force Japan to warn, detect and engage against the DF-17 in a very short time period.

Q: That could prove to be a very tricky missile for the Self-Defense Forces and U.S. military to deal with, couldn’t it?

Murano: In the case of intercepting ballistic missiles, interceptors could engage them in space and thus we could protect a large area as a whole, a concept known as area defense. However, since glide missiles barely fly into space but glide at a lower altitude, we would have to deploy missile defense systems near important assets and facilities, which is called a point defense.

This means that the SDF and the U.S. military in Japan would need a larger number of terminal missile defense systems, imposing huge financial costs on both sides. For such reasons, the DF-17 no doubt makes China a bigger threat to Japan and the United States.

Q: How do you think China will use hypersonic glide missiles in the event of war?

Murano: In the case of a military crisis on Taiwan or the Senkaku Islands, I think China will attack airports and ports used by the SDF and the U.S. military, hoping to prevent U.S. intervention and Japanese support.

In addition to the ballistic missiles and cruise missiles China already has, I think China will use hypersonic weapons to instantly destroy important military facilities such as command-and-control systems, communication systems, runways, sensors and naval vessels. There is no way right now for Japan and the United States to address these threats.

In fact, even if ground-based intermediate-range missiles are deployed in Japan, they would not be very useful to attack against China’s mobile missiles themselves. In any case, since Japan and the United States would not be able to intercept all Chinese missiles in the first wave, some Japanese and U.S. fighter aircraft would be destroyed on the ground before taking off.

On the other hand, China also would not be able to achieve its tactical objectives only with missiles either. China would need to deploy fighter aircraft and bombers as well to maintain its air superiority. In order to interrupt this, it would be important for Japan and the United States to have the capability to destroy Chinese runways, hangars and sensors.

If Japan and the United States successfully prevented some Chinese fighter aircraft and bombers from participating in operations, it will be easier to maintain our air superiority around the southwestern island chain area.

Furthermore, even if U.S. aircraft carriers or fighter aircraft tactically disperse from Japan to avoid a scenario involving a sudden strike from China, intermediate-range missiles deployed in Japan could still deter China. It is essential to deter China’s first strike by making China aware of its potential damage and difficulty in achieving its objectives.

Q: It sounds like a reasonable strategy, but wouldn’t possessing offensive-oriented missiles be inconsistent with the Constitution’s Article 9 and the exclusively defense-oriented policy of Japan?

Murano: It is possible to interpret the exclusively defense-oriented policy flexibly. Since 1956, as then-Prime Minister Ichiro Hatoyama explained in the Diet, Japan has defined “strikes on adversary’s military bases” as included in self-defense. As long as adversary forces are targeted rather than cities or populous areas, it is possible for Japan to conduct offensive operations under certain restrictions even under the current Constitution.

To be sure, we should not change the concept of "to not engage in a war of aggression." But it is no longer appropriate to restrict uniformly in advance the SDF’s necessary force posture and operations, given the rapidly changing security environment resulting from rapid technological development. The idea of “minimum necessary defense capability” is also ambiguous.

Rather than minimum or maximum capability, what’s important is to consider the best posture and budget in the current security environment.

There is a tendency in Japan to have discussions on national security and defense converted into a constitutional debate. However, constitutional scholars and legal experts are not specialists in analyzing the security environment or in defense forces planning.

It is essential that we first understand the severe security environment facing Japan and then consider what strategies and force posture are needed to improve that environment. Discussions between those who support and oppose revision of Article 9 revolve around institutional and legal arguments, which is hardly relevant for how that could affect deterring China and North Korea.

Q: But wouldn’t the deployment of U.S. intermediate-range missiles in Japan lead to concerns among the Japanese public of becoming entangled in a U.S. war since such a deployment could prompt China to target Japan?

Murano: Japan should not accept intermediate-range missiles just because the United States wants Japan to do so. Rather, Japan and the United States should discuss how to share their roles, missions and capabilities based on the mutual understanding that intermediate-range missiles are necessary for their defense. If Japan has these strike capabilities, it would mean it also must take on the related responsibilities.

Simultaneously, this discussion about intermediate-range missiles can be a good opportunity for Japan to mitigate the concerns of entrapment into a U.S. war by taking more responsibilities and having a greater say in the U.S. operational planning process.

Murano: Quite a few argued against the Abe administration at that time in Japan, saying that Prime Minister Shinzo Abe simply obeyed U.S. President Donald Trump and bought too many F-35s. However, when they said, “The Abe administration bought too many F-35s,” they have to be able to answer, “How many and what weapons are enough for our demands?” Unfortunately, few Japanese, including in the Diet and in the media, can engage in such constructive criticism.

It is impossible to discuss necessary qualities and quantities without clarifying the evaluative criteria used to determine what would be appropriate levels against various assumed threats.

Q: Why do such policy discussions not occur in Japan?

Murano: Partially because it is common in Japan to begin discussions with policy recommendations rather than the underlying intelligence analyses. This can also be applied to debates about the Constitution and national security policy.

Not everyone can analyze intelligence and situations; only experts who have experienced professional training can do this. When these experts use professional and objective judgments, they usually reach a rough consensus.

If this consensus is used as a foundation and if multiple policy alternatives are compared, it will be possible to hold a good policy debate. I think the problem is that Japanese lawmakers and the media tend to begin discussing their interest in policies without paying attention to the appropriate assumptions.

In the United States, the government works with expert teams from think tanks who have security clearances so that the government can receive unbiased intelligence analyses and appropriate feedback. If the Japanese government cannot afford to spare human and intellectual resources for such analyses, think tank professionals will be able to effectively help the government.