Hideyoshi castle ruins in Kyoto called ‘discovery’ of this century 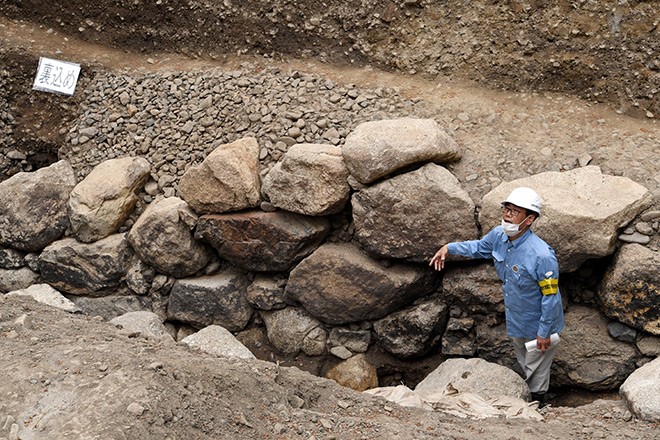 A worker stands next to part of an excavated stone wall believed to be of a castle in Kyoto built by the warlord Toyotomi Hideyoshi. (Kenta Sujino)

The excavation of ruins of the last castle built by the warlord Toyotomi Hideyoshi is being hailed as the greatest discovery in Japan of this century.

While there have been references in the writings of court nobles about the “Kyoto Shinjo,” literally new Kyoto Castle, there has until now been no solid evidence to show what kind of structure Hideyoshi (1537-1598) ordered built.

On May 12, the Kyoto City Archaeological Research Institute announced the discovery of remnants of a castle wall and moat within the grounds of what now constitutes the Kyoto Imperial Palace.

The castle is believed to have been completed a year before Hideyoshi’s death. Diaries of court nobles of the time only refer to the structure as Hideyoshi’s palace, without giving it a formal name.

The site is located in the southeastern section of the Kyoto Imperial Palace and covers about 32 hectares. Hideyoshi resided at the palace when his son and successor, Hideyori, received his court rank. Hideyoshi’s widow, Kita-no-Mandokoro, also resided there after her husband’s death.

Remnants of the castle wall and moat were found under the foundations of the Kyoto Sento Imperial Palace, which is where emperors resided after abdication.

One section of castle wall, constructed in a north-south direction, measures about eight meters in length. The wall measured between 1 meter and 1.6 meters high in places and was comprised of three to four stone layers. Although the upper portion had collapsed, the wall in its prime was likely around 2.4 meters high.

The techniques used to construct the castle wall likely date to the Azuchi-Momoyama Period (1568-1600) based on the careful manner in which blocks of stone were placed.

Researchers theorized that the moat was originally at least three meters wide and 2.4 meters deep.

Stones that had fallen from the castle wall, as well as gold-plated roof tiles that bore the family crest of the Toyotomi family, were discovered in the filled in moat.

Hitoshi Nakai, a professor specializing in the history of castle building at the University of Shiga Prefecture, said historical references to a palace had led most experts to believe the structure was only a “residence surrounded by a wall.”

But Nakai said the discovery of remnants of a castle wall as well as gold-plated roof tiles indicated a magnificent building stood there.

“This is the greatest discovery this century related to an excavation of a Japanese castle,” Nakai said.

He added that Hideyoshi likely built it so Hideyori could succeed him to the court rank of “kanpaku,” the title for an individual who served as chief adviser to the emperor.

Other experts pointed to the significance of the location.

Soichiro Kitagaki, who is honorary head of the research institute studying Kanazawa Castle in Ishikawa Prefecture, said the careful manner in which the stones were laid for the wall was “most appropriate for the ruler of the land.”

Kitagaki added that because Hideyoshi’s castle was located so close to the Kyoto Imperial Palace, the warlord likely realized the importance of creating a structure worthy of being admired by court nobles and others who prized beauty.

Kazuto Hongo, a professor of medieval Japanese history at the Historiographical Institute of the University of Tokyo, said the Kyoto castle showed that the ancient capital still held immense importance to Hideyoshi even after he tore down the Jurakudai palace.

But whereas Hideyoshi built the Jurakudai palace at the height of his powers, the Kyoto castle was constructed a year before his death.

Hongo speculated that Hideyoshi built the castle as a means of passing on the authority of the high court ranks he held to his successors. Hongo noted that Hideyoshi was concerned about Tokugawa Ieyasu (1543-1616) gaining control of the nation after his death.

(This article was compiled from reports by Rikako Takai and Yoshito Watari.)