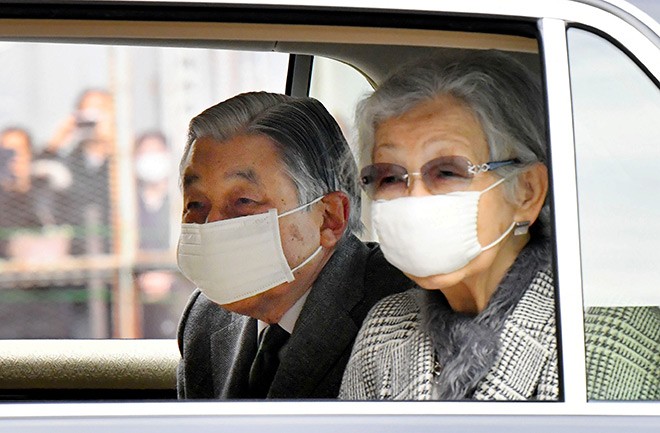 Under strict precautionary measures against the novel coronavirus, Emperor Emeritus Akihito and Empress Emerita Michiko have expressed concerns about health care workers and others affected by the pandemic, the Imperial Household Agency said.

The couple moved to a temporary residence in Tokyo’s Minato Ward on March 31 from their residence on the Imperial Palace, where they had lived for 26 years.

Their relocation to what is known as the temporary Sento Palace came at a time when Tokyo started seeing a surge in new infection cases, and thorough safety measures were put in place, according to the agency.

Akihito, 86, and Michiko, 85, have followed the “stay home” campaign urged by the government.

They had planned to regularly visit the Imperial Palace to take strolls and do some research.

But they have abandoned the plan until the pandemic is brought under control. They also rarely have visitors to the new residence.

Their aides who commute to the residence wear masks all the time to protect the elderly couple against infection.

“They remain highly vigilant, including on their commute, not to bring the virus to the residence,” an official with the agency said.

Akihito and Michiko have no particular health problems at the moment, according to the agency.

They have given thoughts toward workers who are playing a crucial role in maintaining society during the pandemic, the agency added.

After staying at the temporary residence for a year and a half, they are expected to move to the Akasaka Palace in Minato Ward when renovation work is completed.

However, the renovation work could be delayed under the state of emergency declared by the government last month.