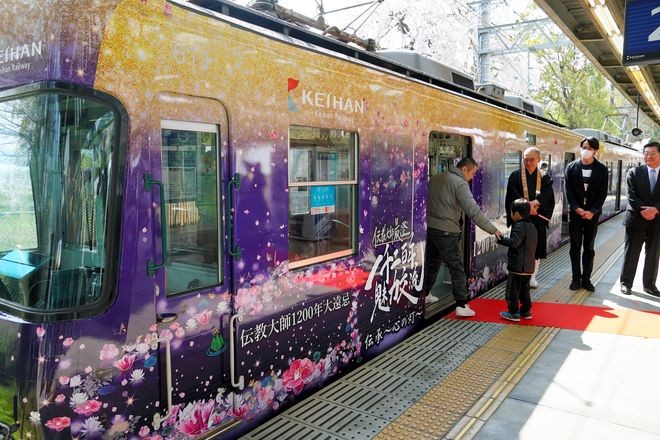 A Keihan Electric Railway train, decorated to commemorate the 1,200th anniversary of the death of the monk Saicho, is unveiled at Sakamoto-Hieizanguchi Station in Otsu, Shiga Prefecture, on April 2. (Jiro Tsutsui)

OTSU, Shiga Prefecture--Keihan Electric Railway Co. has debuted a two-car train here to celebrate next year's 1,200th anniversary of the death of the monk Saicho (767-822), the founder of the Tendai school of Buddhism.

The train, which is running on the rails of the Ishiyama-Sakamoto Line, is painted in purple with its upper area accented in gold paint.

A myriad of lotus, camellia and other flowers are painted over a purple background in a design depicting them drawn to the eternal flame, which has burned inside Enryakuji temple for 1,200 years.

The design's intent is to evoke an image of the flame lighting the way toward the future.

Enryakuji is the headquarters of the Tendai school of Buddhism. The flame is preserved inside the temple's Konponchudo hall.

The train will make about 15 daily round trips until July 2021.

College students belonging to a private committee that promotes Saicho's teachings came up with the idea for the commemorative project.

The committee is headed by Shingo Torii, vice chairman of Suntory Holdings Ltd., the parent company of one of Japan's leading brewing companies.

The idea for the design was an instant hit with Yoshifumi Kato, the committee's vice chairman, when college student Umi Shiroma, 21, unveiled it in June last year at a news conference to announce the committee's establishment.

Kato, who is also chairman of Keihan Holdings Co., said he would get the project rolling immediately.

Shiroma attended a ceremony on April 2 to mark the first departure of the new train at Sakamoto-Hieizanguchi Station in Otsu's Sakamoto district.

The student said taking part in the project's meetings had been a thrill, and he valued the experience of meeting Kato and citizens in Sakamoto. Doing so allowed him to "reflect Saicho's thoughts in the design," he said.

Project members held more than 40 meetings about the design before it came to fruition, he added.

Tokyo seems on delicate path to recovery in state of emergency

EDITORIAL: With Tokyo Olympics up in the air, realistic appraisal needed