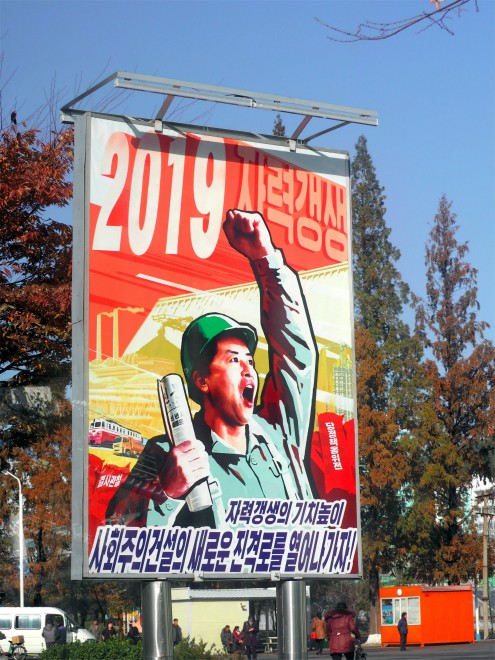 A sign calling for "self-reliance" efforts is shown in autumn 2019 in Pyongyang. (Provided by a North Korean source)

Economic failure is forcing North Korean leader Kim Jong Un to follow the same playbook as his grandfather and father did before him, taking their nation down an increasingly reclusive path.

As the 10th anniversary approaches of Kim's appearance at the ruling Workers' Party of Korea's conference in September 2010, Pyongyang has not reaped favorable results from summits with the United States and South Korea.

Continuously engaging in developing missiles and nuclear weaponry, a large-scale tourism zone development plan has also fallen by the wayside, resulting in Pyongyang's isolation from the international community.

According to the statistics, goods totaling a paltry $216 million (23 billion yen) were exported to China last year, with a record-high trade deficit of $2.37 billion posted against Beijing. Transactions with China account for more than 90 percent of North Korea's trade.

Although a U.N. report reveals Pyongyang smuggled coal and soil from rivers to China and earned nearly $400 million, the figure is far lower than the more than the $3 billion generated through official annual exports alone in 2013 and 2014.

The situation is further exacerbated by the delay in a resort development plan.

The Asahi Shimbun obtained an image that was taken last autumn showing a construction site at the Wonsan-Kalma coastal tourist zone in the eastern part of North Korea.

Whereas Kim demanded the resort area be completed by April 2018, most buildings have yet to be completed. That is likely because internal fittings, window glass and other materials cannot be imported.

Under the challenging economic environment, Pyongyang organized the general meeting of the party's Central Committee late last year, in which Kim declared, "We must nullify the hostile forces' sanction pressure to achieve a frontal breakthrough."

A senior South Korean government official long in charge of issues connected with the North summarized what "a frontal breakthrough" means.

"Pyongyang has no intention of compromising in diplomacy, so it does not hold any expectations for sanctions being relaxed," the official said. "To avoid unrest, it will not forge ahead with difficult economic reforms, simply resorting to a conventional way. This is what is meant in the declaration."

In fact, Pyongyang appears to have shifted from economic reconstruction based on international cooperation to self-help efforts, taking into account the fact that the North Korean media stresses more "self-reliance" in reference to mass mobilization campaigns.

At the party's political bureau meeting in April, Foreign Minister Ri Son Gwon was named as a new alternate member, meaning that the foreign minister post was downgraded compared with the time of his predecessor, Ri Yong Ho, who was a formal member.

Kim now shows no intention of seeking talks with the United States and other countries while continuing to launch short-range ballistic missiles as part of the development program of nuclear weapons and missiles.

Meanwhile, Kim Su Gil, director of the General Political Bureau of the military, and Pak Jong Chon, chief of the military's general staff, were newly appointed as political bureau members.

The decision seemingly represents Pyongyang's plan to reintroduce the military-first policy similar to the one adopted in the reign of Kim Jong Il.

Referring to the revival of the traditional tactics, a source close to both Tokyo and Washington noted that prompting the move is the struggle of the North Korean leader to strengthen his authority.

"Frequently reassigning personnel is proof that Kim Jong Un is always concerned about the likelihood of failing to maintain his power," the source said.

Kim did not appear at the Kumsusan Palace of the Sun to pay his respects on April 15, the birthday of Kim Il Sung. It is extremely rare given that Kim tries to justify his authority based only on his blood relations.

Though Kim began appearing in public again on May 1, officials in both Tokyo and Washington still suspect that the North Korean leader is suffering from some health issues.

Kim Yo Jong, the younger sister of Kim, was selected as a political bureau alternate member at the April meeting and engages in more activities on behalf of her brother, apparently to lessen his burden.

But more than one North Korean source pointed out that Pyongyang's current course of action would not drastically change irrespective of Kim's health.

"Even if Kim Jong Un is stricken by an illness, the privileged would promote Yo Jong as a new leader to build a new system of authority," said a source. "North Korea's current political system and policy would not be altered so easily."