Clogged cooling system likely cause of gas leak in India 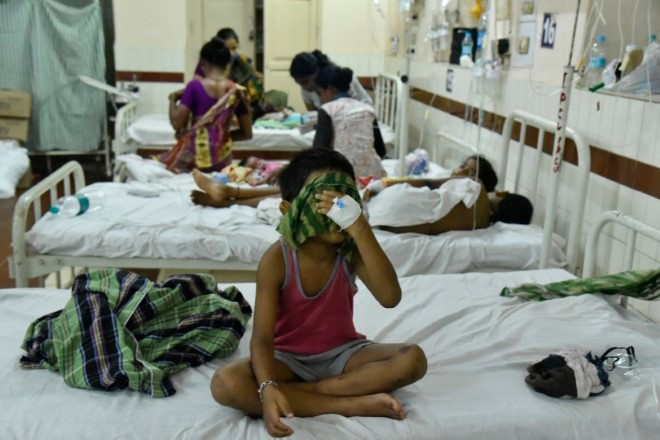 Children receive treatment at a hospital following a chemical gas leak in Vishakhapatnam, India, on May 8. (AP Photo)

VISAKHAPATNAM, India--A clogged cooling system was the likely cause of a temperature surge in a storage tank which led to a gas leak at a chemical plant in India, killing 12 people, three state government investigators told Reuters.

They said workers at LG Polymers, a unit of South Korea’s LG Chem near the southern city of Visakhapatnam, did not use a warning system to alert local residents but informed company management after the leak in the early hours of May 7.

The three investigators asked not to be named as they are not authorized to publicly discuss the investigation, launched by the government of Andhra Pradesh state.

LG Polymers said the situation at the plant was now under control but it, and LG Chem did not respond to detailed questions from Reuters for this article.

About 800 people were taken to hospital after the leak, and some were asleep when gas drifted over their homes. Police have filed a culpable homicide complaint against LG Polymers.

When a Reuters witness visited the Venkatapuram village adjoining the plant on Tuesday, leaves on trees exposed to the gas looked shriveled and had turned brown.

The Andhra Pradesh state government declined to give any details of its investigation.

The three investigators said the temperature inside the oldest of the three storage tanks holding styrene monomer, a raw material used in polystyrene products, rose to over 150 degrees Celsius, more than six times the permitted level.

“The chiller unit was clogged because of a polymerization process, which occurs when temperature exceeds certain levels,” one of the officials said.

To slow the polymerization process, a chemical reaction that generates heat, styrene monomer must be stored at 20-30 degrees with a cooling system and chemical compounds, or inhibitors, typically used to keep temperatures under control.

If unchecked, the heat generated from the polymerization process causes the chemical to vaporize.

But the cooling system was clogged, and the likely cause of the blockage was a chemical reaction inside the tank holding the styrene monomer, the three investigators said.

The skeletal workforce at the facility overnight was unable to bring the situation under control, they said.

“When temperatures started rising, the staff at the plant were not able to use the cooling system,” one said.

LG Polymers said in a statement on Thursday that it planned to ship remaining styrene monomer inventories to South Korea.

“The team of production, environment and safety experts are currently investigating the cause of the incident,” it said.

The team would work with authorities “to analyze the cause of the incident, prevent a recurrence and support damage recovery.”

Company officials told investigators the temperature within the storage tank was in the allowed range till temperature rapidly rose early on May 7, the three officials said.

Experts say it generally takes weeks for the temperature in a styrene monomer storage tank to rise to 65 degrees, before a runaway polymerization process occurs, leading to the liquid chemical reaching its boiling point of 145 degrees in minutes.

But conditions in parts of a storage tank--such as corners or the surface--could provide an environment or “localized hotspots” where the process can accelerate, and subsequently lead to a rapid escalation in temperature.

One of the officials said they were investigating the possibility of a localized hotspot at the surface.

Control operations were hampered by a lack of inhibitors to slow a runaway polymerization process in the event of a cooling system failure, two other investigators said.

The factory had been in the process of re-opening after a weeks-long nationwide lockdown imposed to curb the spread of the coronavirus.

Workers said they first noticed a dense vapor the base of one of the plant’s three storage units and sprinkled water on it, but minutes later spotted thick smoke coming out of the top of the same storage unit.

One of the investigators said the gas leak was a result of a lack of safety precautions.

“It was clearly a crime of omission,” he said.