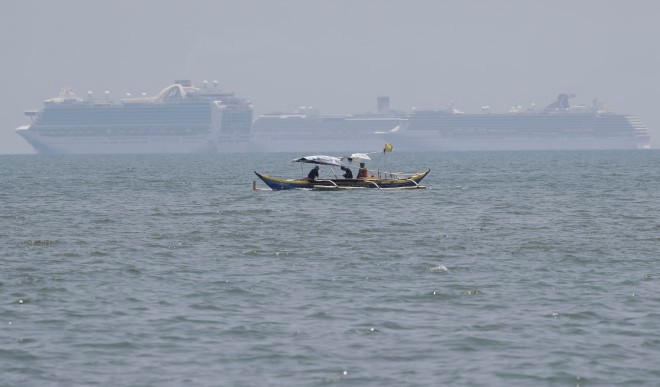 A fishing boat passes in front of the Ruby Princess cruise ship, left, and other ships as they are anchored in Manila Bay, Philippines, on May 7. (AP Photo)

MANILA--In the past few weeks, Manila Bay in the Philippines has been transformed into the world’s biggest parking lot for cruise ships, none of which have any guests.

More than 20 vessels with a combined volume of about 2 million tons are clustered off the coast of the capital, awaiting coronavirus clearance for more than 5,300 Philippine staff to return home from abandoned cruises, with no guarantee of a job at sea again.

More ships are set to join the flotilla, says the coast guard, which has been shuttling between ships to administer 4,991 virus tests for crew quarantined for the 14 days mandatory for repatriates. No suspected cases have been reported.

Crew told Reuters they were bored, lonely or frustrated being so close to home, but felt fortunate to be confined to their cabins in comfort, knowing that thousands of Philippine returnees are in tougher quarantine conditions elsewhere.

“Each person is staying in a suite room--we feel like the guests now,” joked Michael Torralba Martinez, speaking from one of the cabins that he normally cleans.

“We feel safer here ... Standards are strict in ships when it comes to cleanliness and sanitation,” he said in an online chat.

Martinez, 33, and the father of two, gave Reuters a virtual tour of his room, one of 1,011 on the 15-deck Sun Princess, where 225 quarantined Philippine staff were being served by colleagues from countries such as China, India and Indonesia.

He displayed photographs of room-service meals, his double bed, balcony and flat-screen television, plus daily puzzles and activities like origami and bingo, to keep entertained in rooms guarded by security staff.

“If someone is caught leaving the room, quarantine is back to day zero for everyone. So no one dares,” he added.

At least 15 ships in the Manila flotilla are owned by subsidiaries of cruise giant Carnival Corp., including Costa Cruises, Cunard, P&O Cruises Australia and Princess Cruises, of which three ships were hotbeds for infections. Those firms did not immediately respond to questions from Reuters.

The return is bittersweet for some, a chance to be home again with less risk of prolonged exposure to an outbreak, but soon jobless and facing dim employment prospects in an industry brought to a virtual standstill by outbreaks, travel bans and flight cuts.

“When I learned we’ll be sent back home, I was happy and sad at the same time. Sad because I’ll lose my job, but happy because I can be with my family,” said Jenison Herrera of the housekeeping staff of the Queen Elizabeth.

The ship has been quarantined since April 20 and without passengers since March 14, a month into Herrera’s nine-month contract, when owners in Australia decided to halt services and sail home the 530 Philippine crew.

“Those who are not in quarantine are the ones who give our needs. We call them ‘frontliners,’” Herrera 33, said of colleagues. “Even the highest positions in the ship.”

It is too soon to gauge the impact of the virus on the estimated 500,000 Philippine seafarers, who sent home $6.5 billion (697 billion yen) in 2019, a fifth of the country’s remittance income, the central bank says.

Ace Rodrin Catibayan, 34, a waiter on the Costa Venezia, is awaiting the outcome of onboard tests. Although he is certain those are negative, he is worried about his income and possible stigma at home from the attention focused on cruise outbreaks.

“For sure it would take time before we can go onboard again. It would be a long wait for us to make a living,” he said.

“I’ll try to apply again or start a small business. But I really want to go back on the ship because I earn higher here.”

Jose Albar Kato, who heads the Philippines’ International Maritime Association and its federation for seafarers’ employers, was not surprised to see the giant huddle off Manila of cruise ships, each the length of two to three soccer fields.

Philippine staffers formed the largest contingent on most cruise ships, he said, so it made sense to park in Manila Bay.

“On average 30 percent to 40 percent of crew are Filipinos,” Kato told Reuters. “It’s a big saving for the owner to just wait it out here.”

Buffet steward Arnold Salarda, 31, has been with the Golden Princess for six years and started his quarantine on May 3.

Though deadly outbreaks on other Princess ships have been a constant worry for his family, he hopes to be the first in line to be rehired when virus infections slow and cruises resume.

“We were told by the company, by the time they resume operations, they will prioritize us, the old crew,” he said.

“But we don’t know when that will happen, because the number of cases is still ballooning.”