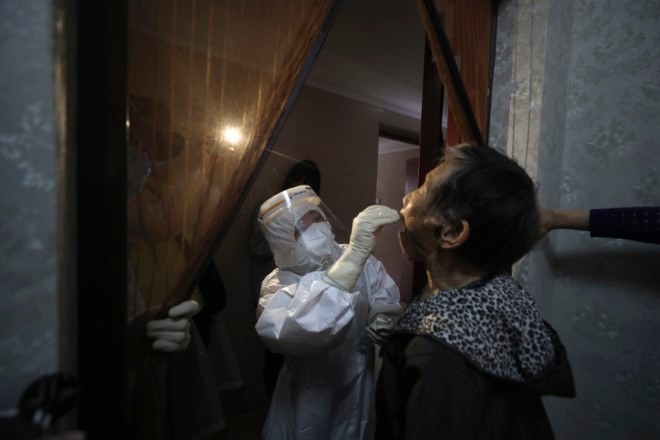 A medical worker takes a swab from a resident for a coronavirus test during home visits in Wuhan, the epicenter of China’s coronavirus outbreak, in central China’s Hubei province, on May 14. (Chinatopix via AP)

BEIJING--China has gone a month without announcing any new deaths from the coronavirus and has fewer than 100 patients in treatment for COVID-19.

The National Health Commission reported four new cases of the virus Friday, all local cross-infections in the northeastern province of Jilin where a cluster of uncertain origin has been detected in recent days. The last day the commission reported a death was on April 14.

Just 91 people remain in treatment for COVID-19 and 623 others are in isolation for being suspected cases or for having tested positive without showing symptoms, including 11 newly detected.

In total, China has reported 4,633 deaths among 82,933 cases since the virus was first detected late last year in the central city of Wuhan.

Some residential compounds are testing inhabitants for the virus as Wuhan attempts to test all its 11 million people in 10 days. The city ordered local communities to test everyone after six new cases surfaced last weekend, the first infections there in more than a month.

China has maintained social distancing and bans on foreigners entering the country, but has increasingly opened up the world’s second-largest economy to allow both large factories and small businesses to resume production and dealings with customers.

AMERICAN JAILED IN SINGAPORE: An American cargo pilot who admitted to “poor judgment” in breaking a quarantine order to buy medical supplies became the first foreigner imprisoned in Singapore for breaching its restrictions meant to curb the coronavirus. Lawyer Ronnie Tan said FedEx pilot Brian Dugan Yeargan was sentenced to four weeks in jail after he pleaded guilty to leaving his hotel room for three hours to buy masks and a thermometer. Singapore has the largest outbreak in Southeast Asia with 26,000 cases. More than 90 percent of those infected are foreign workers living in crowded dormitories, while the government recently began easing restrictions for the local population. The lawyer said Friday he would apply for the sentence to be shortened for good behavior.

MORE SEOUL INFECTIONS: South Korea has reported 27 fresh cases, including 22 in the Seoul area, where health authorities have been scrambling to test and isolate potential virus carriers after discovering dozens of infections linked to clubgoers. The new transmissions have forced a delay in reopening schools, now scheduled to start May 20. Health Minister Park Neung-hoo expressed hope the country could keep the outbreak under control.

WORLD BANK AIDS INDIA: The World Bank has approved $1 billion (107 billion yen) as emergency COVID-19 response to support India’s efforts at providing social assistance to poor and vulnerable households severely impacted by the pandemic. A bank statement said this will take the total commitment from the Bank toward the emergency response in India to $2 billion. Support of $1 billion was announced last month to aid India’s health sector. An immediate allocation of $750 million will help scale-up cash transfers and food benefits for essential workers involved in coronavirus relief efforts and benefit migrants and informal workers, the bank said.

SYDNEY RESTAURANTS REOPEN: Many cafes and restaurants in Sydney opened again Friday as some coronavirus restrictions were lifted, although rainy weather and ongoing fears over contagion appeared to keep patronage relatively low. Australia’s most populous state of New South Wales began allowing cafes, restaurants and places of worship to reopen with up to 10 people on the condition they adhere to social distancing rules. Pubs and clubs were also permitted to trade but only for dining. State Premier Gladys Berejiklian warned people to take personal responsibility, saying that easing restrictions in some other countries had backfired.

SRI LANKA ENDS VILLAGE LOCKDOWNS: Sri Lankan authorities have reopened the last two villages that remained locked down. The army announced the decision Friday after authorities were satisfied that no new virus cases were emerging from the villages. The villages in Colombo and Gampaha districts are poor localities with people living in congested conditions. Factories and businesses have already started operating with restrictions and a weeks’ long curfew is now limited to nights in most parts of the country.

THAILAND MALLS TO OPEN: Thai authorities will allow malls and swimming pools to reopen and ease other restrictions imposed in March to combat the coronavirus. The reopenings set for Sunday have conditions, including keeping cinemas closed and limiting use of public swimming pools to one hour per person. Curfew hours have been shortened by one hour to 11 p.m.-4 a.m. while inter-provincial travel remains discouraged and international commercial passenger flight arrivals banned. Thailand earlier this month allowed the reopening of barbers, restaurants and parks.