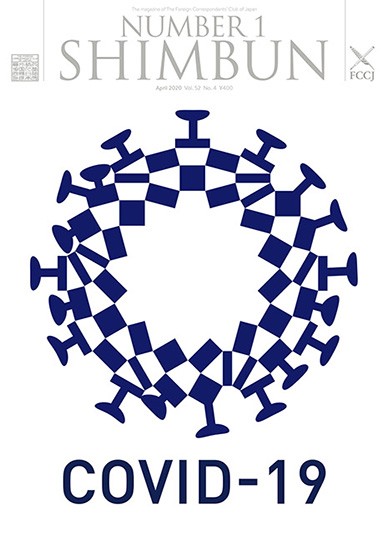 Number 1 Shimbun, the monthly magazine for members of the Foreign Correspondents’ Club of Japan, found itself the target of rare social media comment, both critical and favorable, with a front cover design in the April issue that combines the logo for the Tokyo Olympics with the novel coronavirus.

The edition was devoted to the coronavirus outbreak and the cover design bears a striking resemblance to the Tokyo Olympics emblem with the label “COVID-19” right below it.

While one social media post praised the “brilliant design,” others were more critical with one contributor writing: “Is it meant to be a sarcastic call for the cancellation of the Tokyo Olympics? I don’t think it is in very good taste because it is too explicit.”

The cover was created by Andrew Pothecary, 58, a Tokyo-based British designer who serves as art director for the magazine, which is also available online.

Pothecary said he wanted to make a powerful statement about the situation in Japan right now because information related to the coronavirus pandemic appears to be changing on a daily basis.

Pothecary added that he took inspiration for the design from a statement by Finance Minister Taro Aso that the Tokyo Olympics was cursed as well as doubts he harbored about a sudden surge in COVID-19 infections in Japan soon after Prime Minister Shinzo Abe announced that the Olympics would be delayed by a year.

“I think many people were hoping until the very last moment that the Tokyo Olympics went ahead as scheduled, but when the decision was made to delay, some likely felt an outright cancellation was now possible,” Pothecary said. “So the Games might still become known as a victim of the coronavirus rather than being called the ‘Coronavirus Games.’”

He explained his view that parody plays an important role of speaking the truth toward those in authority.

“I thought it raised the question of, ‘Are you still thinking about going ahead with the Olympics when there does not seem to be any clear path for bringing the coronavirus outbreak to an end?’” said one member of the organizing committee.

Illustrators in Japan offered their own thoughts about the difficulty of parodying an issue as complicated as the deadly coronavirus.

Shoji Yamafuji, 83, who creates parody manga and is well known for his zany caricatures of politicians, felt that parody invariably goes down well with the general public when it is directed at those who hold overwhelming power and marks them as being far removed from what ordinary people are thinking.

“But it is difficult to create a pleasing parody regarding the coronavirus problem because it is a serious issue that involves factors such as the possible collapse of the medical care structure,” Yamafuji said.

Masaru Hashimoto, 78, who draws political and social parody cartoons, said while the coronavirus is a global issue that should be the theme for illustrations “it is difficult to draw because there is an aspect to it involving personal decisions to refrain from certain activities.”

(This article was written by Naomi Nishimura and Chihiro Ara.)