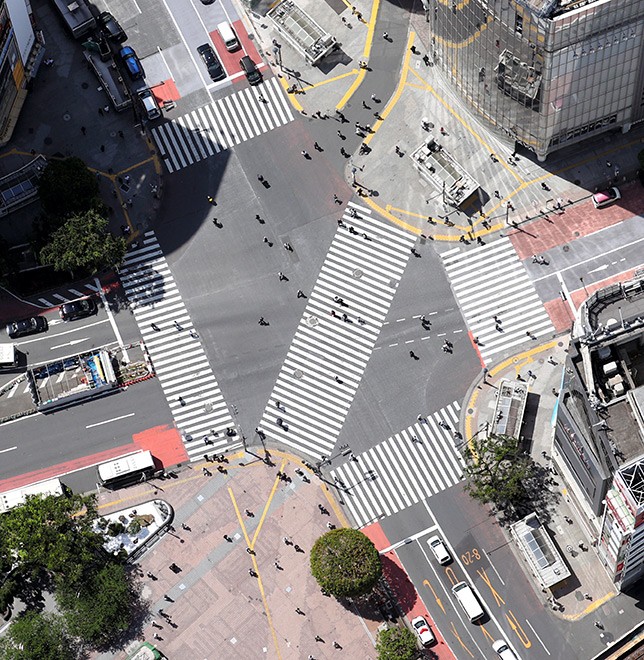 Pedestrians are scarce at the scramble crosswalk in Tokyo’s Shibuya Ward on May 15 as the capital remains under a state of emergency. (Shiro Nishihata)

On the first weekend following the lifting of the state of emergency in 39 prefectures, 60 new coronavirus cases were confirmed across Japan on May 16, raising the overall total to 16,329, according to health officials.

The national death toll rose to 748, with 19 deaths registered on the day.

In Tokyo, where the state of emergency remains in effect along with seven other prefectures, 14 new cases were confirmed, the 11th consecutive day that daily infections fell below 50.

Of the 14, the source of infection was unknown for six patients.

The number of deaths in Tokyo was 11 on May 16, returning to double digits for the first time in eight days.

In Hokkaido, which is also under the state of emergency, seven people tested positive, bringing the overall total to 1,006.

In Kanagawa Prefecture, another prefecture covered by the state of emergency, 12 new cases were reported, raising the accumulated total to 1,263.

The infections raised the tally of the outbreak at the hospital to 73.

As for the remaining prefectures under the state of emergency, the number of confirmed new cases was five in Saitama Prefecture, eight in Chiba Prefecture, none in Kyoto Prefecture, four in Osaka Prefecture and two in Hyogo Prefecture.