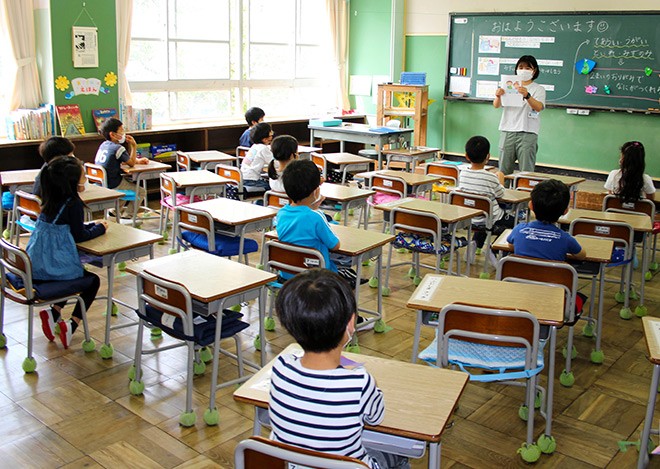 Half of first-graders attend class at Numama Elementary School in Zushi, Kanagawa Prefecture, on May 15 to avoid a crowded classroom. (Yuka Orii)

If Japan shifted to an academic year starting in September next year, it would face a shortage of 28,000 elementary school teachers and cost local governments close to an additional 300 billion yen ($2.8 billion) in the first year, according to a study.

The study was conducted by a group of seven experts led by Takehiko Kariya, professor in the sociology of Japanese society at Oxford University.

It is based on the assumption that the country did not take a package of measures to ease the impact from the transition to a new school year.

“Cool-headed debate should be conducted based on evidence as it could have serious implications,” Kariya said. “The shift could ruin not only the school system, but also the day care system and could significantly impact parents raising children.”

The group studied data from central government surveys, including ones on education spending by local governments, on the number of schools, students and teachers, and on social welfare facilities.

The shift to the academic year starting from September, rather than the current April, has been advocated to make up for the delay in schoolwork as many schools have been closed since March due to the spread of the new coronavirus.

Authorities in Tokyo, Osaka and other prefectures are leading the call for the change, saying it would also bring Japan in line with Western nations.

The central government is expected by early June to compile a report on the advantages and disadvantages of the introduction of a new school year.

A project team of the ruling Liberal Democratic Party will craft proposals to the central government by early June.

Under the current school system, children born between April 2 in a given year and April 1 the following year are grouped into one grade, starting school in April.

The education ministry is considering that pupils born between April 2, 2014, and Sept. 1, 2015, will enter elementary school in September 2021.

In this case, the number of first-grade children is estimated to increase by 425,000, or 1.4 times more than the number under the original calendar starting from April.

As the children born between April 2, 2014, and April 1, 2015, must attend day care centers for five more months, local governments will have to spend 264 billion yen in their additional schooling.

An estimated 28,000 new teachers would be required to address the surge in the number of first-graders.

The shift would also put an additional 265,000 children on the waiting list for day care centers. The number of elementary school children without access to after-school child care would total 167,000.

The ministry will also consider a scenario in which children born between April 2, 2014, and April 1, 2015, would start elementary school in September 2021.

Under this scenario, there would be no surge in spending by local governments and in the number of teachers needed and children put on the waiting list for after-school child care, the study showed.

But an estimated 265,000 children would be left without access to day care centers annually.