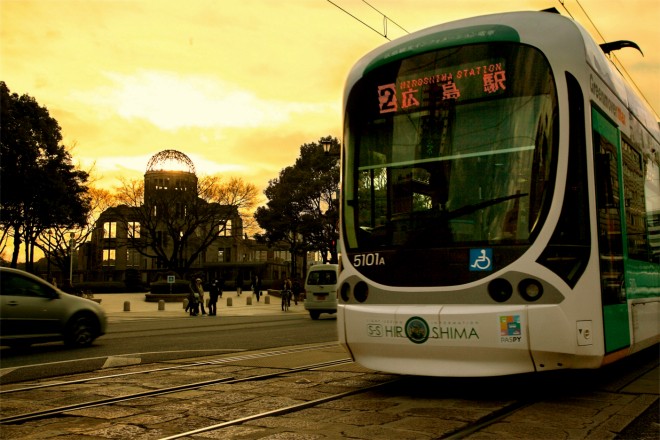 As the sun sets over the Atomic Bomb Dome in Hiroshima, the latest model of a streetcar, the Green Mover Max, passes. (Asahi Shimbun file photo)

Seeing the sky aglow with a setting sun, you may have experienced remembering your hometown.

For Tran Thu Trang, a 29-year-old Vietnamese woman working at Nagoya University, it evokes memories of Hanoi and certain sights at the Long Bien Bridge there.

As Trang looked up at the sky on her way back home from school, she used to see the bright orange sun setting slowly over the bridge, which was invariably swarming with motorbikes.

Trang always felt a rush to return home before it became dark. Her memories of sunsets were associated with her desire to have dinner with her family as soon as possible, an aspect of her peaceful everyday life.

Last year, however, she had an experience that radically changed her perceptions about the setting sun when she visited Hiroshima for the first time.

In Hiroshima, Trang heard about survivors of the atomic bombing of the city who say they do not like to see a glowing sunset because it reminds them of the red sky that appeared when the bomb was dropped.

But the episode made her think about people in Vietnam who are still suffering from the aftereffects of the Vietnam War. Even though the glowing sunset Trang saw by the Atomic Bomb Dome was beautiful, she now knew that not everyone could enjoy the sight with peace of mind.

Trang wrote about the experience in an essay and submitted it to a Japanese language essay contest for students of the language. Her essay won first prize in the competition, which attracted 9,086 entries from 66 countries and regions, when the winners were announced in April.

Memories do not belong to the past but reflect our current perceptions.

I feel a sense of guilt/ As if I were at a place where I should not be/ I wonder when and why/ This feeling was born in me/ Like sunset clouds whose colors have faded.

I wonder what is the border that separates things that remain in memory from those that sink into oblivion.