“Azahata,” or tomato hind, survives the winter, again, in waters off the Izu Peninsula in Shizuoka Prefecture. (Video footage by Kazuhiko Okada and still pictures by Kazushige Horiguchi) 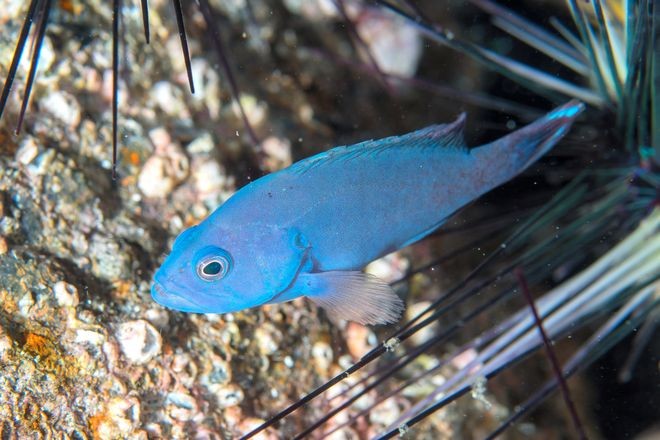 A young “azahata,” or tomato hind, drifts from the southern sea to waters off Cape Osezaki in Numazu, Shizuoka Prefecture, in August 2018. The bluish fish is about 4 centimeters long. (Provided by Kazushige Horiguchi)

NUMAZU, Shizuoka Prefecture--Unusually warm winter weather has prevented sea temperatures off the Izu Peninsula from dropping, enabling young fish from southern areas to survive in waters normally too frigid for them.

With help from local guide Shota Kumagai, 24, an Asahi Shimbun reporter dived into a popular diving spot off Cape Osezaki here on March 14 with photographer Kazushige Horiguchi, 33, to confirm a sighting.

The aim was to verify whether a story was true that “azahata,” a fish also known as the tomato hind, made it through two consecutive winters in the sea.

At a depth of around 20 meters, the diving team found the fish, each of which measured about 30 centimeters long and had a vivid red body color and a distinctive cap above the eyes--all characteristics of azahata. The reef fish are normally not seen in the area around this time of year.

Azahata change body color from a bluish hue to red as they grow. From summer through fall, young azahata hatched in waters off the Ryukyu Islands, which includes Okinawa Prefecture, swim northward on the Kuroshio current along the drifting seaweed and reach the sea off the Izu Peninsula.

However, the young fish, which are about 4 cm in length, typically die before adulthood. They cannot survive the coldest season between February and March, when water temperatures off the Izu Peninsula fall to around 14 degrees.

Shinkichi Mizuno, 47, who is in charge of taking care of fish at the Izu Mito Sea Paradise, an aquarium in Numazu, confirmed the fish were azahata after looking at Horiguchi’s photos.

“The fish were likely individuals that survived the winter twice, but that’s been considered impossible,” said Mizuno.

“Because sea temperatures are rising every year, we see coral growing in this area for the first time. The sea off the Izu Peninsula is definitely changing.”

According to the Office of Marine Prediction of the Japan Meteorological Agency, sea temperatures there have remained high because of two factors. When the Kuroshio current’s normally straight route along the Pacific coast changed drastically, it brushed by waters off the Izu Peninsula, causing warm seawater to flow in.

The other reason is unseasonably warm winter weather, which has prevented sea temperatures from dropping.

Many other southern species also made it through the winter here.

Schools of “tsubameuo,” or longfin batfish, and “mure-hatatatedai,” or schooling bannerfish, also swam around the dive team, like a scene from waters off a southern coast.