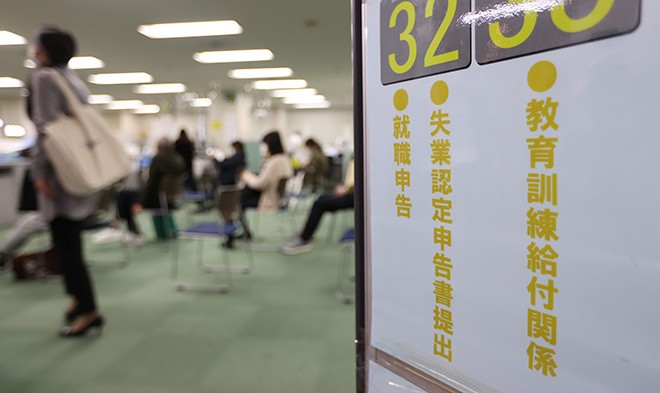 This service counter in Tokyo’s Shibuya Ward handles consultations for dismissals and terminations of temporary contracts and notifications from those who lost their jobs. (Nobuo Fujiwara)

The coronavirus pandemic is expected to cause a huge wave of layoffs among temporary employees later this month, but the labor ministry appears oblivious to the plight of those most vulnerable in the workforce.

With the virus wreaking havoc on the economy, companies will likely cut costs by terminating the contracts of many nonregular workers. By the end of May, decisions on contract renewals are typically made in Japan.

According to the labor ministry, 7,428 workers were expected to lose or had already lost their jobs due to the COVID-19 outbreak as of May 14. The figure is based on data that the ministry’s labor bureaus around the country obtained from companies.

But that figure may be only the tip of the iceberg.

The labor ministry has not released such coronavirus-related data concerning temporary workers on its website, and it provided only oral answers to questions from The Asahi Shimbun.

The data obtained by the ministry does not differentiate between regular and nonregular workers nor does it show the number of temporary workers who are likely to lose or have already lost their jobs.

“We haven’t thought about obtaining a breakdown of the data,” said an official of the ministry’s employment policy department.

Some labor bureaus, however, are starting to provide more detailed information.

One bureau in Nagano Prefecture said 149 temporary workers had or were expected to have their contracts terminated as of April 24.

However, the ministry has not disclosed figures by prefecture.

According to the ministry’s labor force survey in March, a little over 70 percent of the 1.44 million temporary workers in Japan are on fixed-term contracts.

The largest proportion, at 390,000 workers, have contracts whose terms range from one to three months.

Most companies in Japan start executing the contracts of temporary employees in April and renew the contracts every three months to coincide with quarterly settlement of accounts.

When companies terminate the contracts of temporary employees, including those whose contracts have been renewed repeatedly, the dispatching temp agencies are required to give them 30 days’ notice.

With business conditions deteriorating across sectors, a surge in the number of such notices is expected at the end of May.

In November 2008, following the collapse of U.S. investment bank Lehman Brothers, the labor ministry conducted a survey on the status of nonregular employees’ contracts. The results showed that around 30,000 people, including about 20,000 temporary workers, were expected to lose their jobs by March 2009 due to the global financial crisis.

In a survey conducted a month later, the figure jumped to about 85,000, including 57,000 temporary workers.

“The 2008 financial crisis had a huge impact on temporary workers in the manufacturing sector, but the impact from the current health crisis will likely extend to a wide range of sectors,” said Shuichiro Sekine, secretary-general of Haken Union, a labor union that aims to improve working conditions of nonregular workers. “The government should do more to get a clearer picture of the situation.”