Stuck at Home, Men in Japan Learn to Help. Will It Last? 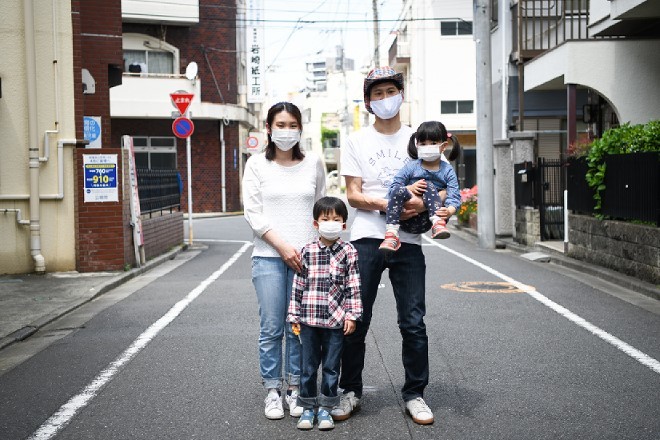 Aki Kataoka and her husband, Susumu, with their children outside their home in Tokyo on May 5, 2020. For working couples, Japan’s efforts to combat the spread of the virus have highlighted disparities in the division of domestic work that shape households across the globe but are especially pronounced in Japanese society. (Noriko Hayashi/ © 2020 The New York Times)

TOKYO — Susumu Kataoka was just looking for a diversion from long days sheltering at home with his family during the coronavirus outbreak. He grabbed his drone and took it for a spin around their Tokyo house, snapping some pictures and posting them on Facebook.

His wife, Aki, was not amused. If he had time to play around like that — revealing their household clutter, no less — shouldn’t he have time to take on more domestic chores and child care?

How little he knew. In a meticulous spreadsheet, his wife, a nursing student, enumerated her 210 tasks to his 21.

“I really wanted him to understand just how much I was doing,” she said.

For working couples, Japan’s efforts to combat the spread of the virus — encouraging teleworking and asking residents to stay inside — have highlighted disparities in the division of domestic work that shape households across the globe but are especially pronounced in Japanese society.

Men who usually see their families only briefly in the morning and at night have been spending weekdays at home during Japan’s coronavirus state of emergency, allowing them to witness just how many chores must be done. Women who toil invisibly doing laundry, dealing with finances and cooking meals are now asking their husbands to pitch in.

The results can be combustible: Arguments sometimes erupt over whose turn it is to sweep up or help with math lessons for newly homebound students. Living quarters are cramped, and feel even smaller with everyone stuck inside. And there are doubts that this dose of domesticity, which may be over in weeks, will open men’s eyes enough to reverse entrenched patterns.

Still, some men say they now feel closer to their families, and hope Japan’s often inflexible work culture will change sufficiently to allow them to spend more time at home even when the pandemic passes.

Susumu Kataoka is trying to adjust his habits.

When he uploaded his wife’s spreadsheet on Twitter — writing that they had been in danger of getting a “coronadivorce,” a term that has trended in Japan — the post was shared about 21,000 times.

“We have a long life ahead of us,” he said during an interview on Google Hangouts from the family kitchen, where a printout of his wife’s spreadsheet was stuck to the refrigerator door. “If I refused to accept this, then we might face more resentment of each other.”

Japan is by no means the only place where women shoulder a disproportionate household burden. And with schools closed in many countries, the extra strains from child care and imbalances in parental help with homework have surfaced around the world.

But men in Japan do fewer hours of household chores and child care than in any of the globe’s wealthiest nations. In a survey last year by Macromill, a market research firm, about half of Japanese working couples reported that men did 20 percent of the housework or less.

Japan’s prime minister, Shinzo Abe, has long promoted a platform of elevating women in the workplace. Yet many women are held back because they bear a heavy load at home.

“If we can’t split the work at home equally,” Aki Kataoka said, “then we cannot create a world in which women are empowered.”

About half of working women in Japan are employed in part-time or contract jobs without benefits, according to government data, compared with close to 1 in 5 men. That has reinforced a sense among some men that their paid work takes priority over their wives’ jobs, leaving women to carry the bulk of household chores.

“Japan fundamentally, and compared to other countries, imposes a lot more of the domestic work on women,” said Yuiko Fujita, a professor of sociology at Meiji University. “I don’t think it is suddenly going to become a society in which it is much easier for women to work just because of this state of emergency.”

Men at home temporarily are unlikely to share chores and child care equally, said Lully Miura, a political scientist who runs the Yamaneko Research Institute in Tokyo. “Most of my friends on Facebook post the nice homemade dishes” made by their husbands, Miura said. “But this is not the majority of people.”

Employers are also a major obstacle. Telecommuting was rare in Japan before the government strongly encouraged companies to let employees work from home to help dampen transmission of the virus. Even during the emergency declaration, many companies, wedded to antiquated office practices, have been reluctant to let their staffs telework.

According to a government survey, just over half of respondents in Tokyo said they were working at home under the declaration. Across the country, it was just over a quarter. With the prime minister lifting the emergency declaration in 39 of the country’s 47 prefectures on Thursday, some employees may go back to the office.

Hiromasa Tsuzaki, 39, a manager at a Tokyo recruitment advertising firm, has not been permitted to work from home at all. His wife, Yuriko, 34, has a job in the same industry and has been teleworking while staying at home with their 5-year-old son.

Tsuzaki said he wished that the government — which has the power only to request that companies encourage remote working — would “give more bold direction to promote a more comprehensive teleworking system” so that he could share some of the household burden.

With her husband still not coming home until 9:30 p.m., Yuriko Tsuzaki relies on frozen meals for dinner and YouTube for her son when she has to conduct meetings on Zoom.

But even men who are able to work remotely during the emergency period may feel extra pressure to prove their productivity to employers who value long hours and displays of devotion to the job.

When Yoshiaki Terajima, 36, first began teleworking about a month ago, he buried himself in his work for a large trading company.

He conducted video meetings at the dinner table in the two-bedroom apartment in Tokyo that he shares with his wife, Erica, 34, a media literacy consultant, and their three children. Terajima, who was accustomed to being away every weekday from 8 a.m. until at least 8 p.m., rarely had time for household chores during the week.

With school and day care closed, Erica Terajima was overwhelmed trying to supervise lessons for their daughters, 7 and 9, or find something other than Legos and videos to occupy their 5-year-old son. “I was doing 90 percent of the child care,” she said. “I could not get my own work done at all.”

Her daughters, noticing she was tired and frustrated, offered to do the laundry. Terajima finally pleaded with her husband to help because she could not sustain everything else on her own. So he started making daily lunches for the family, cleaning bathrooms and assisting their daughters with schoolwork.

Once the state of emergency is lifted — currently scheduled for the end of May — he would like to continue working from home. “Now that I’ve spent so much time with them, I feel this is normal,” Yoshiaki Terajima said. “I think we can take this situation as a good opportunity to change the work culture drastically.”

That could be a challenge. Not only are punishingly long hours common in Japan, but so are long stretches working out of town, which often leaves women alone at home.

Since October, the husband of Nanae Minamiguchi, 44, has been in his native Chile on business with his trading company. He is now stuck there because of travel restrictions.

Minamiguchi works five mornings a week stocking fruits and vegetables at a supermarket in Osaka. She has no choice but to leave her children, 11 and 7, at home alone.

Their teachers dropped off workbooks shortly after the emergency was declared in early April, but there is no other online curriculum, so the children have little to occupy them while she is at work.

She acutely feels the loss of visits from her parents, who normally help with child care when her husband travels. But with the risk of infection, they are staying away.

Minamiguchi worries about getting infected at the supermarket. She is scared about what would happen to her children.

Yet she said she wasn’t sure her husband would help much even if he were home.

“Maybe in another family where the husband does more,” she said, “it would be different.”

Aki Kataoka, too, sometimes frets about how her family would cope if she fell ill with the virus. She figured that listing all her household and child care tasks on the spreadsheet would ensure that her husband knew what to do if she were hospitalized.

Susumu Kataoka says he has learned to consult the list for nudges. In the past, after dinner, “I used to just sit there and do my own thing,” he said. Now, “the list says I should fold all the laundry. So I started to do that instead of killing time.”

He suspects that he may slip back into old routines when he resumes his regular work schedule and commute.

“Because I am here, I have more time to do housework,” he said. “But once I have to go back out and have to stay out late with work, I may not be able to do all these things.”