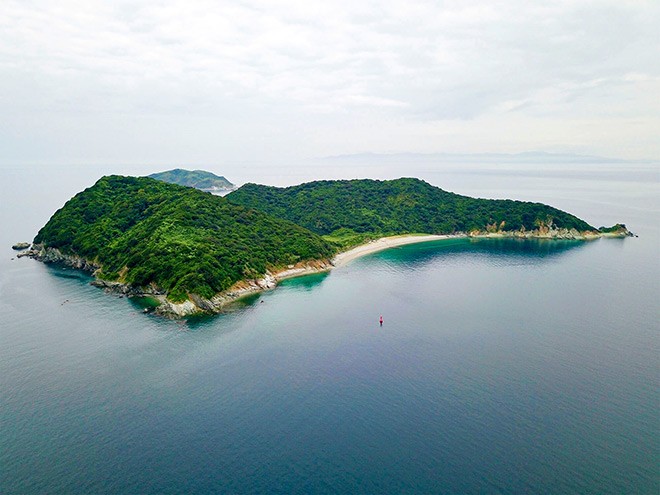 Jinoshima in Arida, Wakayama Prefecture, has attracted people who fantasize about life on a desert island. (Provided by Kaito Kaji)

Is your dream to be cast on a hit show set on a remote desert island like “Survivor”? Did you grow up idolizing Tom Hanks’ character and his volleyball companion Wilson in “Castaway”?

Then Japan is the perfect destination for you, boasting some 6,432 uninhabited islands waiting for you to test your limits and ultimate survival skills.

For some, Japan’s thousands of desert islands offer the chance for fun in the sun in a remote, exclusive locale. But for others, the secluded spots are lucrative business opportunities.

Japan is, in fact, one of the nations with the most uninhabited islands in the world--a fact relatively unknown by the Japanese themselves.

There are 416 populated remote islands in Japan, according to the 2015 census. They include Okishima, a tourist-popular island on the waters of Lake Biwako in Shiga Prefecture, known as “cat island” for its omnipresent inhabitants.

An island is defined as a naturally formed tract of land, not reclaimed land, by the Japan Coast Guard.

It must have a perimeter of at least 100 meters and not be connected to a mainland with a wide structural object such as a bridge.

That means the total number of desert islands fluctuates every year, depending on how the natural environment changes.

In 2013, a new island appeared for a limited time near Nishinoshima island in the Ogasawara island chain after the eruption of an underwater volcano.

A tiny islet called Esanbehanakitakojima, off Hokkaido’s Sarufutsu village, vanished when it sunk out of sight sometime by last year.

Conducting a census on desert islands has been difficult.

“Overall, the number of populated islands has been decreasing,” said Tsuyoshi Miki of the Tokyo-based Center for Research and Promotion of Japanese Islands.

Miki, 52, thinks the inconvenience of living remotely has caused depopulation.

Many of the uninhabited islands are owned by the central and local governments.

But some are privately owned.

Part of the controversial Senkaku Islands in Okinawa Prefecture had been privately owned until the Japanese government purchased the land in September 2012.

“Some people mistakenly believe that a desert island is inherently a valuable property, but it has no value as a property for sale,” said Masanobu Sato, 52, who heads Aqua Styles, an Australia-based sales broker for uninhabited islands in Japan and abroad.

The price of a desert island depends on the distance from the mainland, condition of infrastructure and the availability of flat land and sandy beaches, among other factors.

“You can’t enjoy an island unless it is inhabitable and people can gather,” Sato said.

Kaji runs Joblive, a Tokyo-based company that produces events and trips to more than 40 uninhabited islands.

Many young people have taken his company’s tours and stayed on islands without electricity or running water, helping local revitalization, Kaji said.

One such destination is Jinoshima island, off the city of Arida in Wakayama Prefecture.

The island used to attract beachgoers in summer, but the number of visitors has dwindled in recent years.

Two years ago, Kaji’s company launched a new event in partnership with the city that manages the island, fisheries cooperatives and other local businesses, which has boosted the number of visitors, much to the surprise of local residents.

The company has suspended such events during the coronavirus pandemic.

But it continues to post videos on YouTube, featuring various remote island-related activities, preparing for when the health crisis ends.

“Once the pandemic is over, I want people to enjoy events and activities that they can only experience on a desert island,” Kaji said.