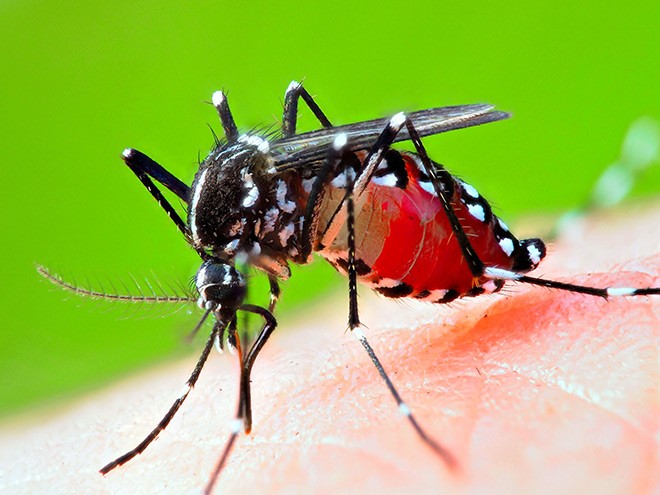 As if Japan doesn't have enough to worry about trying to contain the novel coronavirus outbreak, ominous signs have emerged that mosquitoes capable of infecting humans with deadly infectious diseases such as dengue fever are establishing a foothold.

Experts cite the effects of climate change for increased sightings of the species not found until now in Japan, and just as worrying, in areas farther north than would normally be expected for another species. They warned that global warming may see the more virulent version becoming more commonplace in some areas.

Mosquitoes in 2015 were linked to the deaths of an estimated 830,000 people around the world, making it the deadliest insect for humans, according to the Bill and Melinda Gates Foundation, a nonprofit organization set up by Microsoft Corp. founder and billionaire Bill Gates and his wife.

The Aedes albopictus mosquito carries the virus that causes dengue fever, which can prove fatal.

The mosquito is said to thrive in areas where the average annual temperature is 11 degrees or higher. Until around 1950, the Aedes albopictus was only found in areas south of Tochigi Prefecture, which lies to the north of Tokyo.

However, with rising temperatures, there were confirmed sightings of the mosquito in 2000 in Akita and Iwate prefectures in northern Japan. In 2016, the mosquito was spotted in Aomori Prefecture at the northernmost tip of the main Honshu island.

The Aedes albopictus triggered a minor scare six years ago after dengue fever spread among people who had visited Tokyo’s Yoyogi Park. Those were the first cases of a disease transmitted by mosquitoes reported in Japan in about 70 years. While no one died, 162 people were infected, and they developed fevers and headaches.

According to the World Health Organization, dengue fever is spreading widely around the world and the number of confirmed infections has increased 15-fold over the past two decades. About 390 million people annually are infected with dengue fever and about 500,000 develop serious symptoms. Of that number, 2.5 percent of the cases prove fatal.

The main transmitter of dengue fever is the Aedes aegypti, which is not normally found in Japan. It is a more virulent version of the Aedes albopictus and has caused epidemics in Southeast Asia and South America.

Last year, the Philippines recorded an outbreak of dengue fever that killed more than 1,000 people nationwide.

There have been recent sightings of the Aedes aegypti in Japan as well. According to the health ministry, there was a confirmed case at Narita Airport outside Tokyo in 2012. Other sightings occurred at international airports around Japan until 2017.

The Aedes aegypti has been exterminated whenever spotted in Japan, so it is not believed to have taken hold.

But Shinji Kasai, who heads the Department of Medical Entomology at the National Institute of Infectious Diseases (NIID), cautions that the Aedes aegypti may be here to stay if temperate conditions continue to be conducive.

“Larva has been found in various studies, meaning the mosquito is breeding and leaving behind the next generation in Japan,” Kasai said. “There is a greater threat of the mosquito taking root in areas that are warm even in winter, such as airport terminal buildings and around subways in metropolitan areas.”

A Chinese research institute released a projection last year that the Aedes aegypti could spread to all parts of Taiwan in 30 years if temperatures rise at the current pace. Presently, the mosquito is found only in southern Taiwan.

Taiwan’s latitude is about the same as that of the main Okinawa island and nearby Ishigakijima island. So, if temperatures rise in Japan at current rates, the Aedes aegypti could end up taking root in Okinawa Prefecture as well.

Insecticides are commonly used to exterminate mosquitoes. Bug-repelling incense and sprays often include pyrethroids, which attack the bugs' nervous system and kills them.

But experts say now is the time for Japan to be on its guard due to findings that some Aedes aegypti mosquitoes have developed a resistance to pyrethroids.

There have been reports of several mutations in Vietnam, and samples of Aedes aegypti collected at Chubu Centrair International Airport in 2016 and 2017 showed a very strong resistance.

If the mosquitoes end up taking root in Japan, exterminating them could become a nightmare.

The NIID is continuing with research on insecticides that crack the pyrethroid immunity problem as well as creating a database on the mosquitoes’ genetic makeup. However, the work is still in its infancy due to budgetary and personnel constraints.

“On top of the expanded area in which the Aedes albopictus is found in Japan due to global warming, if the Aedes aegypti should also take root, the risk of a dengue fever epidemic is bound to increase,” said the NIID’s Kasai. “I am worried about another dengue fever epidemic in light of estimates of more people carrying the virus entering Japan due to the increase in inbound tourists coupled with the rise of these mosquitoes in this country.”

Research is under way overseas to use genetic engineering to eradicate the mosquitoes.

University researchers in Australia have infected Aedes aegypti with the Wolbachia germ before releasing it into the wild. The infection stops multiplication of the pathogenic virus within the female mosquito and renders it powerless to become a transmitter of disease.

But such efforts are still in the research stage.