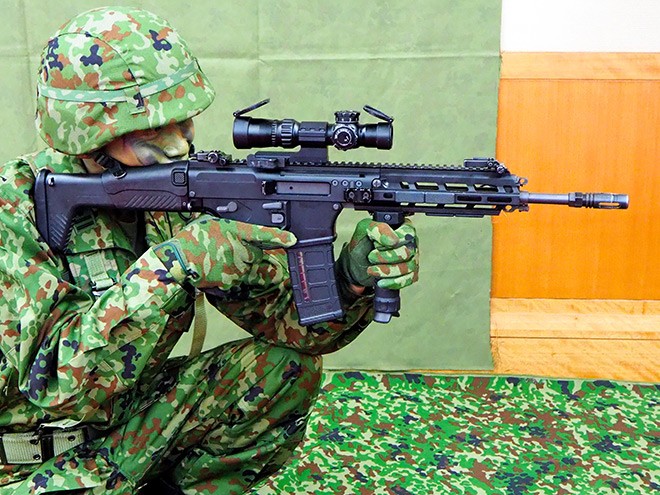 The Ground Self-Defense Force's new Type 20 assault rifle, at the Defense Ministry in Tokyo’s Shinjuku Ward on May 18 (Yoshitaka Ito)

Japan's Ground Self-Defense Force (GSDF) is getting its first new rifles in 31 years to assist it in the defense of the country's southwestern Nansei Islands against advances by China.

The Type 20 assault rifles, so named since they are being introduced in fiscal 2020, were shown to the media on May 18 at the Defense Ministry in Tokyo's Shinjuku Ward.

The GSDF hasn't upgraded its rifles since 1989, when troops received the Type 89 model.

In response to China's increased naval actions in the East China Sea, the GSDF has recently been shifting its troops to the Nansei Islands.

The new rifles were designed to be more resistant to water and corrosion so they could be used in amphibious operations on the remote island chain, which stretches about 1,200 kilometers from the Osumi islands in Kagoshima Prefecture to Yonagunijima island in Okinawa Prefecture.

Howa Machinery Ltd. in Aichi Prefecture, which made the Type 89 one generation ago, also manufactured the Type 20.

Arms makers in Japan and overseas competed to equip the GSDF with new rifles. The Howa Machinery model was selected at the end of last year based on its performance, effective range and price.

The Defense Ministry will spend about 900 million yen to purchase about 3,000 of the weapons in fiscal 2020. Troops will begin receiving them from fiscal 2021.