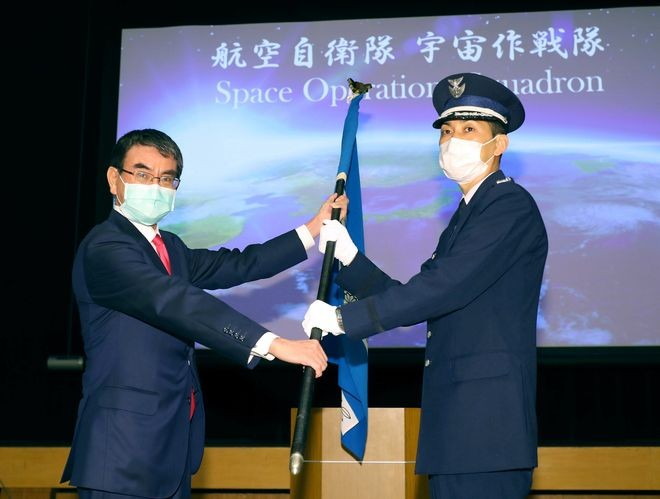 Defense Minister Taro Kono hands the flag of the Self-Defense Force’s Space Operations Squadron to the Air-SDF officer who heads the unit during the inauguration ceremony held in the Defense Ministry in Tokyo on May 18. (Pool)

Japan's first-ever space squadron to monitor space debris and protect Japanese satellites made its debut at the Air Self-Defense Forces' Fuchu Base in Tokyo on May 18.

Made up of 20 members, the Space Operations Squadron for the time being will collaborate with the Japan Aerospace Exploration Agency (JAXA) and U.S. Forces in undertaking surveillance to ensure Japanese satellites operate safely.

Outer space increasingly forms a key component of military strategy among the world's major powers, especially the United States and China. Without satellites, instant communications would not be possible. Satellites are indispensable for detecting potential attacks and missile precision guidance systems.

Successful anti-satellite weapons tests by China in 2007 shocked the United States. And in reaction to the escalation of military utilization of space by China and Russia, President Donald Trump established the United States Space Force (USSF) as the space warfare service branch of the U.S. Armed Forces last year. The struggle for space hegemony among the superpowers is ratcheting up.

Under National Defense Program Guidelines revised in December 2018, Japan is reinforcing its military capabilities in new domains such as space, cyberspace and electromagnetic spectrum. The formation of the space squadron flows from that policy decision.

Surveillance of space debris, such as fragments of retired satellites and launched rockets, is indispensable to protecting active satellites. Given that SDF's such surveillance capability translates into a capability to identify targets and attack them, safeguards are needed to prevent an escalation of militarization of space.

Addressing senior officers last autumn, Prime Minister Shinzo Abe said the SDF faced its greatest transition since its formation. "The evolution (of the SDF) into the air and space self-defense forces is no longer just a dream," he went on.

But Abe's comments were premature and uncalled for, as there was still no grand vision about what this would entail and the functions the unit would be called to take on in the future.

The Diet resolution of 1969 established “the principle of peaceful use of space” as the bedrock of Japan’s space policy. But the enactment of the Aerospace Basic Law in 2008 paved the way to expanding the policy to the area of national security.

Japan is enhancing cooperation with the United States in space policy. At the Japan-U.S. "two-plus-two" meeting of foreign and defense ministers in April 2019, agreement was reached to install the Japanese quasi-zenith satellite Michibiki--the centerpiece of the Japanese-edition GPS--with U.S. equipment for the purpose of space debris surveillance.

There is every likelihood that the United States, which is eyeing Japan's technology and funding, will continue to demand further cooperation from Japan.

For Japan, this spells an urgent need to discuss and determine in advance what the SDF can and cannot do in the light of the nation's basic pacifist and defense-only principles.

Today, outer space has become a shared domain for the entire world, supporting humanity's daily needs, such as for weather forecasting and obtaining location information on satellite navigation systems and smartphones.

Outer space must never be allowed to become a "battleground of the future." For Japan that has always avoided the concept of the utilization of space for military purposes, the only appropriate direction to follow would be to keep striving to create international rules for the peaceful utilization of space.