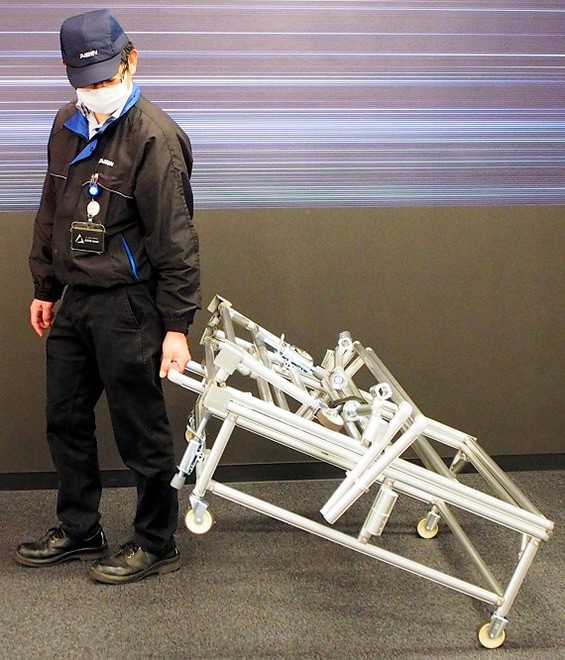 Auto parts maker Aisin Seiki Co. began production of beds more than half a century ago but withdrew from the business in March.

The bed frame is made of aluminum so it can be readily set up at hospitals and elsewhere. Equipped with casters, it can be folded for easier transport.

“We designed the bed frame, taking advantage of our experience in the development of not only car components but also household goods,” said a company representative.

While two bed frames can be produced a day, 16 sets of a temporary partition to surround beds can also be made daily. The products will be delivered when requests come in.

Aisin Seiki was founded in 1965 through the merger of two auto parts and sewing machine manufacturers. It started selling beds under the Toyota Bed brand in 1966.

The product, renamed Asleep in 2006, featured an exclusively developed mattress using resilient resin. But the business failed to turn a profit, and production was suspended in March.

The decision was made to concentrate personnel, funds and other resources into the development of such technologies as automated driving because the auto industry is undergoing a drastic reform that is said to arise “only once in 100 years.”

The plan to produce bed frames was proposed when the Toyota Motor Corp. group in April unveiled its strategies to help medical institutions combat the new coronavirus, including the development of a face shield to guard against infection.

“We wanted to make contribution, using long-refined technology, know-how and human resources,” said the Aisin Seiki representative. “We will forge ahead with various projects.”