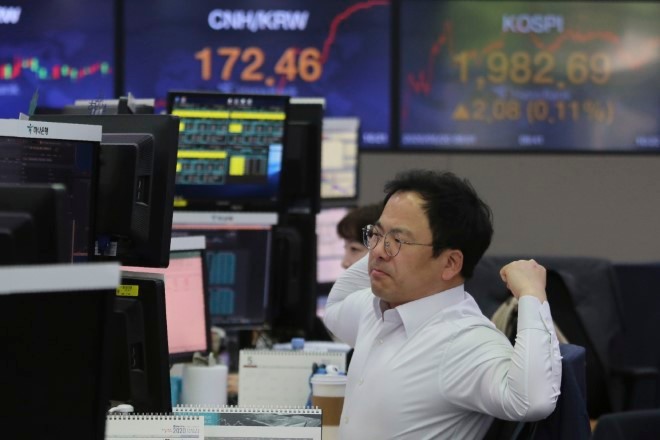 A currency trader watches monitors at the foreign exchange dealing room of the KEB Hana Bank headquarters in Seoul on May 20. (AP Photo)

Asian shares were mixed Wednesday as market players waffled between hopes for recovery as economies gradually reopen and worries over the havoc wreaked by the pandemic.

Japan’s state of emergency, which asked people to stay home but was not a lockdown, was recently lifted in the rest of the nation, with social distancing restrictions.

Yoshimasa Maruyama, chief economist at SMBC Nikko Securities, said the lifting of the emergency could come as soon as later this month. But the hardest hit sectors, such as tourism and restaurants, are unlikely to recover for some time, he said.

“It remains unclear whether there will be another surge in coronavirus cases, but if medical care systems can be maintained, a gradual return to normal economic activity can also be expected,” he said.

Japanese electronics and entertainment company Sony Corp. stock gained at the opening, following its announcement after markets closed Tuesday that it was making its financial services unit a wholly owned subsidiary. But worries took over and the stock lost 2.3 percent on Wednesday.

Wall Street stocks ended broadly lower, as trading turned wobbly a day after the market notched its biggest jump in more than five weeks on optimism about the vaccine from Massachusetts-based Moderna Inc.

Moderna announced positive interim clinical data for a vaccine candidate against the novel coronavirus SARS-CoV-2. However, scientists noted that results were available for only a handful of those participating in the tests, making any meaningful conclusions likely premature.

The S&P 500 fell 1 percent after having been up by 0.4 percent in the early going. Losses in banks, health care stocks and household goods companies accounted for a big portion of the selling. A late-day slide erased early strength in technology stocks and companies that rely on consumer spending.

Investors are betting that the economy and corporate profits will begin to recover from the coronavirus pandemic as the U.S. and countries around the world slowly open up again. However, concerns remain that the relaxing of stay-at-home mandates and the reopening of businesses could lead to another surge in infections, potentially ushering in another wave of shutdowns.

Quarterly results from big retailers Tuesday underscore the challenges companies face as long as the pandemic looms, discouraging consumer spending and compelling governments to mandate restrictions on commerce. Companies that have been able to remain open or effectively amplify their e-commerce business have fared far better than those that have had to temporarily close doors.

Walmart reported a 74 percent surge in fiscal first-quarter sales as people stocked up on crucial supplies while sheltering in place due to the coronavirus. Its earnings fell as it spent $900 million in additional compensation for workers, but still topped Wall Street’s forecasts. Its shares initially headed higher but finished 2.1 percent lower.

Kohl’s, whose stores have been closed during the outbreak, fell 7.7 percent after reporting that it swung to a $541 million quarterly loss as its revenue sank more than 40 percent.

Traders also hammered shares in Home Depot after the home improvement supply chain reported quarterly results that fell short of Wall Street’s estimates. While the company benefited from a surge in homeowners rushing to buy essential supplies, increased spending on employee compensation and other costs related to the coronavirus dragged on its profits. The stock fell 3 percent.

In other dealings, benchmark U.S. crude oil gained 68 cents to $32.50 a barrel in electronic trading on the New York Mercantile Exchange. It gained 31 cents to $31.96 on Tuesday. Brent crude oil, the international standard, rose 11 cents to $34.76 a barrel.

Prices have firmed up as oil producing nations cut back on output and as the gradual reopening of the economies around the globe helps spur demand, which crashed earlier this year due to widespread travel and business shutdowns related to the coronavirus. Crude oil started the year at about $60 a barrel.