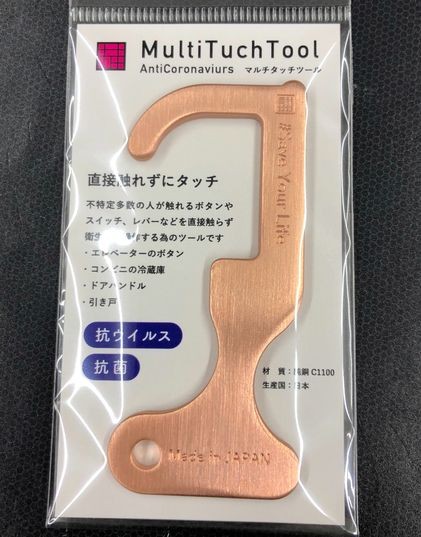 The Multi Touch Tool released on May 15 is designed to operate door handles and elevator buttons. (Provided by Katsura Kisyo)

KANAZAWA--A medal maker here has created a tool shaped like a question mark that allows people to take a hands-off approach during the novel coronavirus pandemic.

The curved section of the Multi Touch Tool can be hooked on to levers to open doors while its round end can push buttons, such as those for elevators.

The idea is to let people perform everyday tasks without having to touch surfaces that could be contaminated with the virus.

“Even if authorities stop calling on citizens to refrain from venturing out or organizing large events, those in society will continue to assume that the virus is close to them,” said Junichi Shimazaki, 52, an official of Katsura Kisyo, a metal processer that developed Multi Touch Tool. “The need for touching the least number of objects as possible will remain.”

Although the company had produced 500,000 medals and badges a month, the number of orders for medals dropped by 90 percent after most athletic competitions in spring and summer were canceled because of the novel coronavirus pandemic, according to Katsura Kisyo representatives.

After the Japan Copper Development Association promoted the metal as effective in preventing the proliferation of fungi and viruses, Katsura Kisyo offered up its new copper tool to cover the losses from its medal business.

In late April, 100 Multi Touch Tools were quickly sold on a trial basis.

Shimazaki, who tried out the tool for a month, holds high expectations.

“People will soon become accustomed to maneuvering the tool once they start using it,” Shimazaki said. “It may be accepted in daily life as widely as masks.”

The product was sold out soon after its release, and the company plans to resume shipping in mid-June for orders placed on and after May 16.