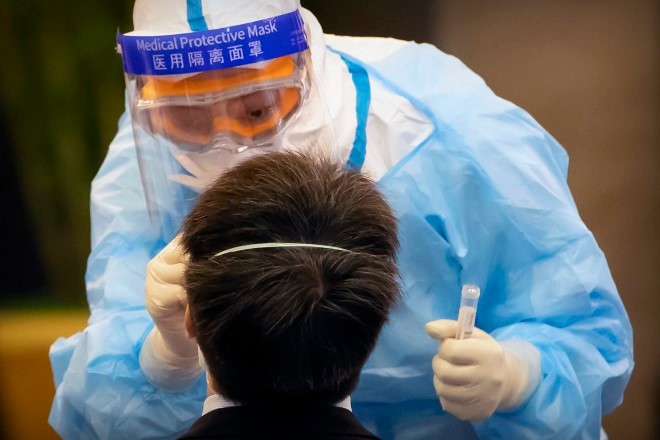 A worker in a protective suit gives a COVID-19 test to a foreign journalist covering a press conference for China’s National People’s Conference (NPC) at a hotel in Beijing on May 21. (AP Photo)

BANGKOK--A New Zealand woman has been reunited with her dying sister in Australia after gaining an exemption from pandemic travel restrictions on compassionate grounds.

Her only sister Gail Baker was diagnosed with incurable ovarian cancer in late March after both countries stopped international travel.

Archer was eventually allowed to fly to Sydney and spent only a week in hotel quarantine before testing negative for the coronavirus. International travelers are usually quarantined for two weeks.

Family friends drove the retired nurse 490 kilometers from Sydney to the New South Wales state coastal town of Bowraville where her younger sibling greeted her with a hug on Wednesday.

Archer told Australian Broadcasting Corp. in an interview aired on Thursday: “Words can’t explain how I feel, to be honest.”

“I’m just so happy that I finally got to be here and be with her. The last two weeks have been the hardest or the longest two weeks of my life,” Archer said.

Australia’s Department of Home Affairs relented on Archer’s travel application after it allowed the New Zealand Warriors rugby league team to relocate from Auckland in preparation for the Australian football competition restarting next week.

New Zealand has largely succeeded in its goal of eliminating the virus. It has reported no new infections over the past four days and most of the people who contracted the virus have recovered. About 1,500 people have been reported as having the virus including 21 who died.

Australia has had similar success in slowing the virus spread although New South Wales remains the worst-affected state. Australia expects New Zealand will become the first international destination with which regular passenger travel will resume because of the low risk of infection.

In other developments around the Asia-Pacific region:

G-7 SUMMIT BACK ON AGENDA? Japan’s top government spokesman said Thursday that the country is considering whether to attend the Group of Seven summit, and details would still have to be decided by the host, the United States. Chief Cabinet Secretary Yoshihide Suga was responding to a question about U.S. President Donald Trump’s tweet Wednesday that he is considering rescheduling a meeting in the United States with world leaders because it would be a “great sign to all” of things returning to normal. Trump had scheduled the G-7 summit for June 10-12 at Camp David but canceled it in March because of the pandemic, saying the leaders would confer by video conference instead. Suga said Thursday that he interpreted Trump’s tweet as “an expression of the president’s intention to normalize the global economy quickly.” He said his understanding is that details such as the dates and format of the meeting are still being studied by the host nation.

10 CASES IN SEOUL: South Korea has reported 12 new cases of the coronavirus and one more death, bringing its totals to 11,122 cases and 124 deaths. The Korea Centers for Disease Control and Prevention on Thursday said 10 of the new cases came from Seoul and nearby Incheon, where health workers have been scrambling to track and test potential virus carriers following dozens of infections linked to nightspots. South Korea was reporting around 500 new cases a day in early March but managed to stabilize infections with an active test-and-quarantine program, which has allowed the country to avoid real lockdowns. Officials have been relaxing social distancing guidelines and proceeding with phased reopening of schools, which began with high school seniors on Wednesday.

LONGER WEEKENDS? New Zealand’s prime minister wants employers to consider switching to a four-day work week as a way to promote tourism, which has been hard-hit by the pandemic. Jacinda Ardern said on Facebook Live people had learned a lot about work flexibility during the lockdown that was eased last week. The nation’s borders remain closed but Ardern said more flexible working arrangements could allow New Zealanders to travel more within their own country. “I hear lots of people suggesting we should have a four-day week. Ultimately, that really sits between employers and employees,” Ardern said. She added that she would really encourage employers “to think about whether or not that is something that would work for their workplace, because it certainly would help tourism all around the country.”

WILDLIFE CONSUMPTION BAN IN WUHAN: The central Chinese city of Wuhan, where the global coronavirus pandemic originated last year, has issued a total ban on the hunting, breeding and human consumption of wild animals. That is an apparent response to research showing the virus most likely originated among bats and was transmitted to people via an intermediary wild species sold for food at a market in the city. The regulation issued Wednesday seeks to carry out measures passed at the national level covering protected land animals as well as sea life, promising financial relief to help dealers move into other lines of business. However, it contains numerous exceptions, including for animals used for traditional Chinese medicine, as long as they are not consumed as food for humans. That left it unclear whether the ban would cover pangolins, small mammals whose scales are used for traditional Chinese medicine, but which are thought to have been the intermediary carrier of the virus. The regulation will be enforced immediately and will be in effect for five years.