Foam leaked at Futenma base in December: ministry official 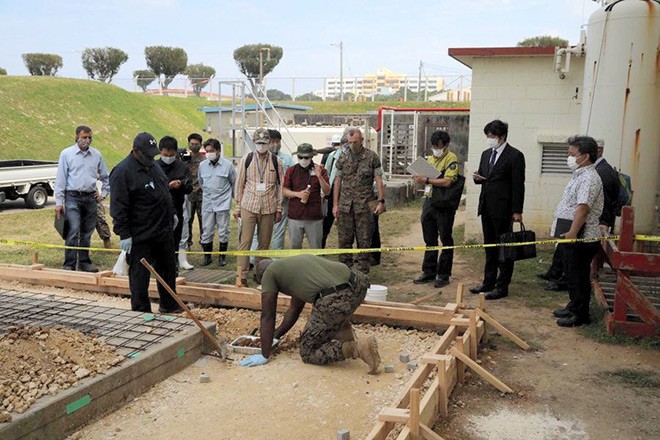 A worker affiliated with the U.S. military, front, collects soil samples near a hanger from which extinguisher foam leaked at U.S. Marine Corps Air Station Futenma in Ginowan, Okinawa Prefecture, on May 1. (Provided by the Defense Ministry)

The Defense Ministry revealed at a May 20 meeting there was a second leak of potentially toxic firefighting foam at a U.S. military base in Okinawa Prefecture.

This one occurred in December last year, months before a similar foam leak happened in April that sparked outrage in the local community.

A Foreign Ministry source said it is not yet clear whether there is a need to conduct an on-site investigation into the December leak, but Defense Ministry officials said they are seeking more information about the incident from the United States.

On April 10, firefighting foam leaked from equipment kept at U.S. Marine Corps Air Station Futenma in the city of Ginowan. An estimated 144,000 liters of the substance leaked outside the base.

The foam contains perfluorooctanesulfonic acid (PFOS), a compound known to cause cancer through prolonged exposure in natural surroundings.

The manufacture and use of PFOS was banned, in principle, by an international treaty in 2009. Japan prohibits the manufacture, use and import of the compound.

At a Lower House Foreign Affairs Committee on May 20, Seiken Akamine, a Japanese Communist Party member who was elected from the Okinawa No. 1 constituency, said the leakage of the foam in April was not the first to occur at the base.

A Defense Ministry official admitted that fact to the committee, saying that a malfunctioning fire extinguishing system caused the foam to leak at the base on Dec. 5.

The official said the U.S. side told the ministry that it removed almost all the foam leaked at the base and that there is no need for concern about an environmental impact since leakage of the foam was not confirmed outside the base.

“The U.S. military itself admitted that the foam leaked outside the base (in December),” he said, citing a document obtained by a British journalist through a Freedom of Information request. The document is believed to be a U.S. military internal investigation report.

“We are asking the U.S. side to provide (the document) to investigate a connection between the leakage in April and one in December,” said the ministry official.

In the document, a question that asked if the foam had spilled outside the base was answered “YES.”

But the document also noted there was no visible evidence that shows firefighting foam leaked outside the base.

As for whether an on-site investigation into the December leakage is needed, which could be done under provisions of an environmental supplementary agreement to the Japan-U.S. Status of Forces Agreement, a Foreign Ministry source said, “It depends on the contents of the document.”

(This article was written by Daizo Teramoto and Hideki Kitami.)