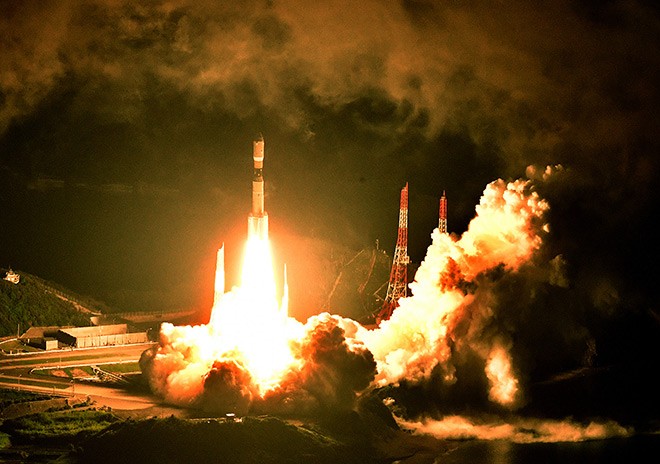 The H-2B Launch Vehicle No. 9 carrying a supply vehicle for the International Space Station blasts off from the Tanegashima Space Center in Kagoshima Prefecture on May 21. (Kotaro Ebara)

TANEGASHIMA ISLAND, Kagoshima Prefecture--Japan’s unmanned Kounotori 9 (HTV9) cargo spacecraft departed on its final mission to ferry supplies to the International Space Station (ISS) on May 21, carried into space by an H-2B rocket.

The H-2B Launch Vehicle No. 9 blasted off from the Tanegashima Space Center here at 2:31 a.m., releasing the Kounotori 9 into orbit 15 minutes later.

The Kounotori 9 will arrive at the ISS on May 25 with about 6.2 tons of goods, including food, beverages and Japanese lithium-ion batteries.

Naohiko Abe, the head of integrated defense and space systems for H-2B maker Mitsubishi Heavy Industries Ltd., said he was relieved the launch could be held considering the complications the coronavirus has caused for many planned global events.

“While events around the world have been scrapped or postponed due to the COVID-19 pandemic, we were able to launch as scheduled because the local people understood and supported us. We really appreciate their cooperation,” Abe said.

With the retirement of the U.S. space shuttle, Japan’s HTVs became the only supply vehicles that transport large cargo to the ISS.

The HTV is being retired to make way for the HTV-X cargo spacecraft, which has a higher transport capability. H-2A and H-2B rockets are being replaced as well for future missions, by the H-3 Launch Vehicle.

JAXA is now developing the HTV-X, which has a transport capability 1.5 times greater than the HTV. The space agency will increase the cargo ship’s electricity supply by enlarging its solar battery panel and will improve its communication speed.

JAXA will also try to automatically connect the spacecraft with the ISS. The HTV-X will also deliver supplies to a space station that is planned to orbit the moon. The station is due to begin being built in 2022 mainly by the United States.

The new H-3 rocket will be launched for the first time in fiscal 2020.